This post originally appeared as an OpEd in the Richmond Times-Dispatch on April 25, 2014. 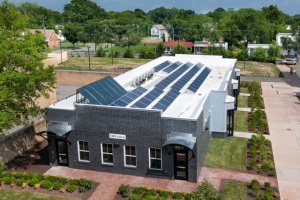 If you think of “green” homes and solar panels as luxury amenities for high-end housing, you might be surprised to learn that these are becoming standard features in low-income housing—even here in Virginia.

Buildings with added insulation, better windows, energy-saving light fixtures and Energy Star appliances translate into big savings on utility bills. This should matter to all of us, but it’s especially important for low-income households. For them, lower energy bills can mean not having to choose between keeping the lights on and putting food on the table.

Today there are over 11,000 units of affordable housing in Virginia that are certified to EarthCraft standards, one of the strictest measures of home energy efficiency. According to Philip Agee, Green Building Technical Manager for EarthCraft Virginia, these new affordable housing units are 28% more efficient than homes that are built to the 2004 model housing code. Units renovated to EarthCraft standards average a 43% improvement in efficiency.

Richmond-based Better Housing Coalition now builds all its low-income housing to exceed EarthCraft standards. As its website explains, “Installing energy-efficient heating and cooling systems, energy efficient windows and lighting, and blown cellulose insulation are standard practice for BHC homes. So, too, is the use of durable cement-board siding and tankless water heaters. Reduced energy usage means reduced utility bills for our owners and residents.”

Even more striking is the inclusion of solar energy in recent projects. Many of the Better Housing Coalition’s buildings include solar PV panels for electricity and solar thermal systems for hot water. Last year the Better Housing Coalition built the first net-zero-energy apartments for low-income residents, combining super-efficient construction with solar to produce as much energy as residents consume.

Another leader in the solar movement is Community Housing Partners, a non-profit that designs and builds low-income housing throughout the Southeast. It has worked with Virginia Supportive Housing to include solar panels on at least four of its recent projects, each system sized to provide 20% of the building’s electricity.

The Heron’s Landing apartments, in Chesapeake, include both 61 kilowatts of solar PV and a 13-kilowatt solar thermal array to supply hot water to the 60-unit complex designed for formerly homeless residents. Across the state in Charlottesville, The Crossings includes 33 kilowatts of solar PV and a 76-kilowattt solar thermal system for 62 units serving homeless and low-income residents. Both projects used Charlottesville-based AltEnergy as the solar contractor, supporting solar jobs in state. Paul Risberg, AltEnergy’s CEO, says his firm is currently working on two more Virginia projects.

Solar systems are also part of the Community Housing Partners’ developments in Richmond (Studios at South Richmond) and Portsmouth (the attractive South Bay Apartments). Now, like the Better Housing Coalition, the organization plans to take the next step, making its latest housing development for low-income seniors in Christiansburg, Virginia net-zero

Municipalities, too, are working solar into their plans for low-income housing.  Last year the Harrisonburg Redevelopment and Housing Authority worked with Staunton-based Secure Futures LLC to install solar on its Polly Lineweaver apartment building, which serves elderly and disabled residents. According to a local television report, the contract will save the Authority money over time and help keep rents stable.

Building “green” is proving such a money-saver for low-income housing that it’s a shame Virginia isn’t applying this lesson more widely. The state’s failure last year to adopt the 2012 model building code standards means that even buyers of brand-new homes won’t be guaranteed the level of quality built into these low-income apartments. Let’s hope the McAuliffe administration takes note and changes course.

4 thoughts on “Green buildings help the poor (and could help the rest of us, too)”