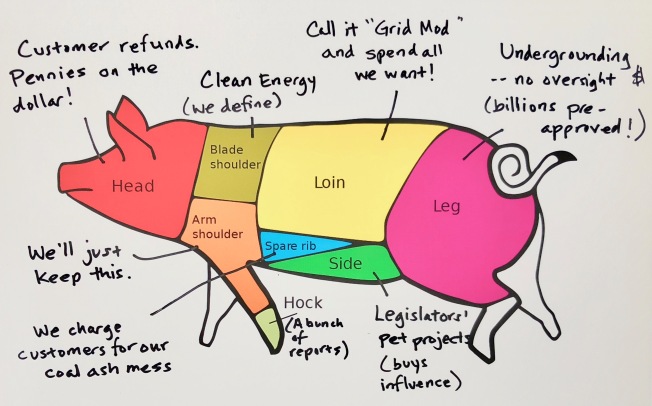 How Dominion sees the bill.

A pig in a poke is defined as “an object offered in a manner that conceals its true value, especially its lack of value.” The expression is said to go back about five hundred years to English marketplaces. A poke was a sort of sack, but why 16th century people bought pigs in sacks, and why they would have bought a sack without looking inside, is not at all clear. I’m guessing the seller was the local pig monopoly, and the buyers were timid leaders who meekly paid their farthings and hoped for the best. After all, that is how we do it in the marketplace of Virginia’s General Assembly when Dominion Energy Virginia comes peddling legislation.

And indeed, the true value (or lack of value) of this year’s boondoggle bill (HB 1558/SB 966) will probably not be understood for months or even years to come. The General Assembly passed this legislation that will govern billions of dollars of new spending paid for by Virginia customers after just a handful of hearings over a few weeks, and with no study or input from outside experts. If you will excuse the expression, this is a lousy way to make sausage.

Arguably, the only thing worse than this bill is the law it seeks to fix, the infamous “rate freeze” legislation of 2015 that simply let Dominion keep a billion dollars of customer money to line its own pockets. You’d think legislators would have learned something about legislating in haste and repenting at leisure.

But the legislation could have been worse. We know this because it was worse; the bills Dominion originally put forward returned even less money to consumers, gave the utilities even more leeway on spending, and included the infamous “double dip” that the SCC said would let Dominion charge customers twice for the same projects. The bills improved over the next few weeks under pressure from progressive Democrats, conservative Republicans, the SCC, the Attorney General’s office, the Governor, and consumer and environmental groups.

Whether it is good enough now remains a matter of debate. Conservatives for Clean Energy and the League of Conservation Voters support the bill, especially the provisions relating to investments in energy efficiency and renewable energy. The Sierra Club, an early opponent, used what leverage it had to get the worst provisions changed before removing its opposition late in the game (while still not supporting the bill). The AG’s Office of Consumer Counsel and Appalachian Voices never dropped their opposition.

Nevertheless, the poke has been bought, so you should definitely take a look at the pig. The Virginia Poverty Law Center and the Southern Environmental Law Center produced a handy summary of the bill’s final provisions compared to both the original bill and the status quo under the 2015 law (and sometimes also to the pre-2015 law).

The summary describes the categories of new spending authorized by the law, but a lot is left to interpretation—Dominion’s interpretation, mostly. Customers don’t seem to have any say in how their money gets spent. They are just supposed to feel happy with the provisions granting them some initial refunds reflecting a portion of the overearnings from past years, plus the utility’s savings from the federal tax cut. Going forward, though, the likelihood of further refunds or rate cuts seems remote. The whole point of the bill is to allow utilities to spend overearnings and avoid refunds. And as always, rates can continue to go up through “rate adjustment clauses” (RACs) like the ones that tacked new charges onto electricity bills even when base rates were frozen.

Moreover, what VPLC’s summary (understandably) lacks is a comparison to what ought to be in there: full refunds based on a review of past earnings rather than legislative guesstimates; mandatory—and much higher—levels of energy efficiency, wind and solar; proper regulatory oversight of rates and spending; and an independent assessment of grid modernization needs rather than blanket permission for a utility to indulge in projects that benefit itself most.

We’ll have to wait until next year for any new legislation, but it is not too early to start laying the groundwork. Governor Northam should direct his administration to begin working with national experts on a comprehensive grid modernization study. The goal should not be to tinker around the edges of current law and policy, but to draft a new and better approach from the ground up. (For a great discussion of why we need this study and what it should look like, see Tom Hadwin’s blogpost from last week.)

Meanwhile, legislators should promise their constituents that they will never again allow a public utility to write our energy laws and force through massive and complex changes over the course of a few weeks of the legislative session. Next time Dominion offers a pig in a poke, the answer should be no.

10 thoughts on “Virginia buys Dominion’s pig in a poke”