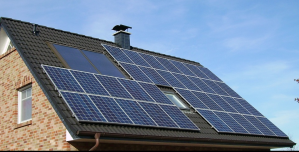 Want an extra solar panel on your roof, just in case? Too bad, chump. Better luck next year. Maybe.

While Dominion’s latest effort to legislate profits into perpetuity got all the press attention this winter, another story went largely ignored. A whole raft of bills that would have opened more opportunities for customer-owned and third-party owned renewable energy died in committee. So did bills supporting energy choice and an energy efficiency mandate.

These bills generally had one thing in common: they were opposed by the same utility that was touting its own clean energy investments as a reason to vote for the Ratepayer Rip-Off.

Most of the rejected bills would have promoted customer investments in solar, a segment of the market that Dominion’s legislation won’t help. These bills included:

It’s tempting to focus blame on the utilities for the demise of these bills, but the fate of one additional bill reminds us where accountability properly lies. SB 191 (Favola) would have allowed net metering customers to install enough solar to meet up to 125% of their previous 12 months’ electric demand, up from 100% currently. As under current law, they still could not sell any surplus electricity at retail. This last point is key: it means customers have no financial incentive to install more solar than they will actually use, and if they do, it’s the utilities that come out ahead.

APCo and the Coops said they were opposed to it anyway, and were written out of the bill to save it. But Dominion agreed to the bill, with the addition of an amendment it wanted. The bill passed the Senate, and a lobbyist for Dominion joined a representative of the Sierra Club (yours truly) to speak in its favor in the House Commerce and Labor subcommittee. Lobbyists for APCo and the Coops also spoke in its favor, just to be nice. No one rose in opposition.

But the subcommittee killed it anyway on a party-line vote.* One of the Republican committee members offered an excuse about “sending it” to the Rubin Group—which, however, they did not do. Discussions with observers later suggested that the vote was a petty, partisan act of retribution against the patron for something entirely unrelated to the legislation.

So while the utilities’ desire to protect their monopoly makes them oppose customer solar, and utility campaign donations persuade legislators to vote accordingly, ultimately voters have only the legislators themselves to blame for the barriers holding back solar in Virginia.

Elections have consequences, as the saying goes, and the fact that Republicans managed to retain a majority in the House by the slimmest of margins this past November was enough for them to be able to continue their long practice of killing popular solar initiatives in subcommittee. The election that was decided by drawing a name from a hat also determined that rooftop solar bills would not advance out of subcommittee, even when they are small, relatively inconsequential, and completely unopposed.

Advocates had hoped the close election would influence Republicans to moderate their trigger-happy approach to clean energy bills. No part of Republican ideology says customers should not install their own solar. Indeed, in past years Republicans have sometimes been leading advocates for rooftop solar.

Maybe Republicans will do better next year, especially if grassroots anger continues to strengthen the Democrats, and Republicans feel the heat. Otherwise, solar advocates will be highly motivated to support Democrats in the 2019 election.

Of course there are plenty of Democrats in the pockets of the utilities, too. That makes it especially important that a growing number of legislators have pledged to refuse campaign contributions from public utilities and their parent corporations. Delegate Mark Keam (D-Vienna) is the latest to “break up” with Dominion over its undue influence on the legislative process.

The pledge isn’t a guarantee of how a legislator will vote, but for frustrated clean energy advocates it offers a simple litmus test that proved out well this year, as pledge-takers overwhelmingly voted against Dominion’s bill. Solar advocates who found this past legislative session more frustrating than ever may find some satisfaction in persuading their own legislators to follow Keam’s example (and get some press attention for it, too).