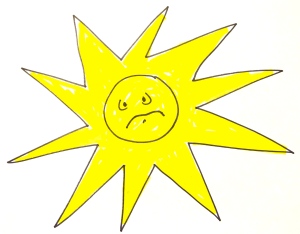 Every year, on the first weekend in October, homeowners and businesses across the U.S. open their doors to a special kind of tourist: the solar wannabe. The American Solar Energy Society’s annual Solar Tour features homes with solar PV and hot water, along with an assortment of “green living” features that inspire envy and emulation.

Envy especially, I’m here to tell you. My home in the Northern Virginia suburbs is surrounded by beautiful mature trees that provide shade for my house, cooling for the neighborhood, carbon sequestration for the planet, and food for an abundance of insects, birds and other wildlife. What it doesn’t provide is a sunny place on the roof for solar panels. So when I go to houses on the DC Metro area tour, it’s a teeth-gritting experience.

I’m hardly alone. Less than a quarter of residents can install solar panels at their homes. The rest either have shade or other siting issues, or they are renters, or they live in condominiums where they don’t control the roof and common areas. That leaves the vast majority of us solar wannabes with nowhere to turn.

Some states let customers choose their electricity suppliers, which means they can select one that will supply them with renewable energy. But Virginia upholds the rights of monopolists to control our electricity supply. And my local monopolist, Dominion Virginia Power, sells only one electricity product: a mix of coal, nuclear, and natural gas, with barely a smidgen of stuff the legislature considers renewable (mainly wood trucked in from forests and burned).

I could subscribe to Dominion’s Green Power Program, but I’d still get the exact same dirty power. I’d just be paying extra for renewable energy certificates (RECs), mostly from wind farms in other states.

RECs don’t do it for me. Adding money to my utility bill for RECs is about as satisfying as buying a gallon of ordinary milk and adding a dollar extra to know that a buyer in Indiana paid for ordinary milk but got organic. Maybe both milks taste the same, but that’s not the point.

No, if I’m buying RECs, I want them to come attached to actual, Virginia-made wind or solar power. I know I’m not alone; the 20,000 people who have signed up for the Green Power Program, plus those who buy from other REC sellers like Pear and Arcadia, are proof that if Dominion cared to build wind or solar, it would find a ready market.

But it hasn’t. And Dominion also refuses to let the private market do the job. I’ve been approached by would-be solar developers who ask why they can’t put a solar array on unproductive farmland and sell the power to people like me. When that happens I swoon with delight for a moment, then glumly point them to the experience of Washington and Lee University three years ago. The university wanted to buy solar from a project on its campus but owned by a developer. Dominion came down on them like a ton of bricks, claiming a violation of its monopoly.

Dominion also opposes allowing customers to pool their money for a shared solar project, like an array on one house that could provide electricity for two or more. Sometimes called community net metering or solar gardens, and a growing trend in other states, shared solar unleashes the power of private investment by freeing up customers to build and own solar together and get credit on their utility bills for their percentage of the electricity the project puts on the grid. Imagine how much new economic activity we could create this way, and how much clean generation we could build, without state government mandates or subsidies.

There are thousands of Virginians like me who want renewable energy and are willing to pay for it. If our utilities don’t want to build it, they should step aside and let customers do it.

I grew up with brothers, so I knew from an early age that the easiest way to make friends with guys was to feed them chocolate chip cookies. I took this strategy with me to college, commandeering the tiny kitchen in our coed dorm. The aroma wafting down the hallways reliably drew a crowd.

One fan was so enthusiastic that he wanted to learn to make cookies himself. So the next time, he showed up at the start of the process. He watched me combine sugar and butter, eggs and white flour.

Instead of being enthusiastic, he was appalled. It had never occurred to him that anything as terrific as a cookie could be made of stuff so unhealthy. It’s not that he thought they were created from sunshine and elf magic; he just hadn’t thought about it at all. He left before the cookies even came out of the oven.

I felt so bad about it, I ate the whole batch.

But I can empathize with that guy when I’m told that as an environmentalist, I should love natural gas. Natural gas is the chocolate chip cookie of fossil fuels. At the point of consumption, everybody loves it. It’s cheap, there’s gobs of it, and it burns cleaner than coal, with only half the carbon dioxide emissions. Disillusionment sets in only when you look at the recipe. (“First, frack one well. . .”)

I realize we have only ourselves to blame. For years, environmentalists talked about gas as a “bridge fuel” that could carry us from a fossil fuel past to a future powered by renewable energy. No one would tarry on that bridge, we figured, because gas was expensive. We’d hurry along to the promised land of wind and solar.

But that was before hydrofracking and horizontal drilling hit the scene. Fracking opened up vast swaths of once-quiet forest and farmland to the constant grinding of truck traffic heading to drilling rigs that operate all day and night, poisoning the air with diesel fumes and sometimes spilling toxic drilling fluids onto fields and into streams. It was before studies documented well failures that let toxic chemicals and methane seep back up along the well borings and into aquifers, contaminating drinking water.

And it was before scientists sounded the alarm on “fugitive” methane emissions from wellheads: gas that escapes into the air unintentionally, sometimes at levels so high as to cancel out the climate advantage of burning natural gas instead of coal.

But just as environmentalists were thinking, “Whoa, natural gas turns out to be a bridge to nowhere,” electric utilities were embracing fracked gas in a big way. Fracking has made gas so cheap that giving up coal is no sacrifice. It’s so cheap they see no reason to get off the bridge and embrace renewable energy. At one conference I attended, a gas company executive gushed, “Natural gas is no longer a bridge fuel. It’s a destination fuel!”

All I could think was, “In that case, the destination must be Cleveland.” Which was surely unfair to Cleveland.

Just to be clear: environmentalists are not opposed to gas because we are spoil-sports, or purists, or hold stock in solar companies. The problem with natural gas is that it isn’t made by Keebler elves, but extracted through a nasty process that is harming the planet in ways both local and global.

If the best anyone can say about natural gas is that it’s not as bad as coal, then lingering on the bridge makes no sense. And anything we do that keeps us here—opening up Virginia to fracking, or building a huge new pipeline to bring fracked gas from other states—is both foolish and dangerous. Foolish, because embracing cheap gas distracts us from the serious business of building wind and solar and using energy more efficiently; and dangerous, because the planet will not stop warming while we play shell games with carbon.

Protesters gather outside the Crystal City headquarters of ALEC

A crowd of protesters gathered at the Arlington headquarters of the American Legislative Exchange Council (ALEC) on September 4 to demand that Dominion Resources, the parent of public utility monopoly Dominion Virginia Power, drop its membership in the right wing “bill mill.”

On the very same day, a jury convicted ex-Governor Bob McDonnell and his wife on federal corruption charges, setting off a new round of debate about Virginia’s lax ethics laws.

The two news items sound like different topics, but in fact they are both about the corruption undermining our democratic system. The McDonnell trial, with its focus on swank vacations, golf clubs, designer clothes and other neat stuff, actually missed the bigger breach of public trust that goes on every day. This takes the form of unlimited corporate campaign contributions and gifts to members of both parties, and the influence over legislation purchased by this largesse.

Dominion Power has spent decades and many millions of dollars building its influence in Richmond this way, to the point where most legislators don’t bother pursuing a bill if the utility signals its opposition. That’s why Virginia has not followed so many other states in requiring its utilities to invest in energy efficiency, wind and solar. Economic arguments, jobs, electricity rates—all these are talked about in committee, and all are irrelevant to the fate of a bill. The only relevant question for legislators is, “What does Dominion think?”

What Dominion thinks, though, is not about what’s good for its customers, but what’s good for its own bottom line. And this is where ALEC comes in. Dominion Virginia Power’s president, Bob Blue, sits on an ALEC committee with representatives from the climate-denial group Heartland Institute, the Koch-funded anti-environment group Americans for Prosperity, and that most oxymoronic of lobby shops, the American Coalition for Clean Coal Electricity. Their purpose is to craft model state bills that protect fossil fuel profits and attack all efforts to regulate carbon emissions.

Dominion provides a straight shot from ALEC’s back-room bill-brokering to Virginia’s statute books, trampling environmental protections along the way and giving the lie to Dominion’s façade of environmental responsibility. No wonder so many of last week’s protesters were Dominion customers who objected to the utility using the money it charges them for electricity to pay its ALEC dues.

We see the result every year in the General Assembly, as bills drafted by ALEC pop up all over the place without attribution. In addition to attacking clean energy, ALEC bills oppose worker protections and minimum wage initiatives, promote stand-your-ground bills like the one at issue in the Trayvon Martin case, and of course, undermine the kinds of clean-government efforts that would reduce the influence of corporations—like campaign finance reform.

And because the voters are the only people who could prove more powerful than corporations—and the only ones who might ultimately cut off the corporate cash flow—ALEC works to undermine voting rights as well.

In the wake of the McDonnells’ convictions, Virginia legislators are once again mumbling about tightening up the rules on gifts. The discussion is half-hearted; the pay for their work is paltry and the hours are long, so they aren’t anxious to give up the perks.

But it’s too late for half-measures. Elected officials are going to have to subject themselves to a ban on gifts, and the prohibition should extend to ballgame tickets, golf getaways and sit-down dinners. The loophole that currently allows campaign funds to be used for personal use must also be closed to avoid an end-run around the gift ban.

But until we turn off the corporate cash spigot, our democracy will still have special interests, not voters, calling too many shots.