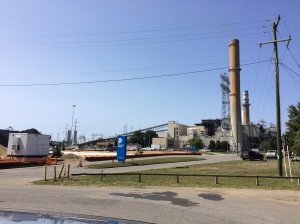 The Northam administration is finalizing regulations to reduce the carbon pollution from Virginia power plants by 30 percent between 2020 and 2030. The Department of Environmental Quality (DEQ) estimates the move will cost consumers only about a dollar per month while accelerating the transition to clean energy.

Instead of celebrating this modest progress on climate action, Virginia Republicans have been fighting it every step of the way. Their latest effort takes the form of two amendments to the state budget that would effectively prevent Virginia from joining the Regional Greenhouse Gas Initiative (RGGI), a nine-state platform for trading carbon emission allowances. It would also stop the Commonwealth from participating in a new compact focused on reducing carbon emissions in transportation.

Virginia law gives the governor a line-item veto in the budget, which requires a two-thirds majority in the legislature to override. But for reasons known only to himself, Governor Northam has instead chosen to remove the amendments by offering his own amendments, which the General Assembly can reject by a simple majority vote.

This cues up the issue for a battle on the House floor on Wednesday, when the legislature returns for the “veto session.” The governor needs the votes of all the Democrats and at least two Republicans to prevail in the House, and those of at least one Republican and the Lieutenant Governor to prevail in the Senate.

Earlier this year, Republicans voted almost unanimously for legislation that, like the budget amendment, would have stopped Virginia from participating in RGGI. Northam vetoed that bill, saying it was bad policy and violated the state constitution. His action probably didn’t persuade any Republicans that he was right and they were wrong.

Still, there are reasons why a Republican who voted for the anti-RGGI bill might support the governor in the budget vote.

One is that using the budget to achieve a policy outcome you couldn’t reach through the legislative process makes a lot of legislators uneasy; it feels like bad governance.

Another is that the anti-RGGI bill was for show; everyone knew the governor would veto it. Moderate Republicans who privately acknowledge the urgency of the climate crisis were able to use their vote to demonstrate party loyalty without actually interfering with the DEQ program.

They bill vote also followed surprise testimony from State Corporation Commission staff members who claimed that trading with RGGI would cost Virginia households much more than DEQ modeling showed. The staff members provided no evidence, but hard-line Republicans saw the threat of rate increases as a gift horse they weren’t going to look in the mouth.

DEQ staff did look it in the mouth, however, and found a number of bad teeth.  DEQ Chief Deputy Chris Bast lambasted the SCC staff for coming into the discussion late, using incorrect assumptions, and failing to show their work.

The SCC staff members followed up after the end of the session with a letter stating their reasoning, though still without showing their math. The late release of the letter prompted Delegate David Toscano to write an editorial in the Washington Post decrying the staff members’ overtly political tactics as well as criticizing their analysis.

In its response to comments on the proposed carbon regulations, DEQ lists several flaws in the SCC staff’s analysis, ranging from significantly overestimating program costs to assuming that Virginia coal plants are immune to the economic stressors affecting coal plants across the U.S.

With time to reflect, many legislators will conclude the evidence supports DEQ. But more to the point, some Republicans may realize that holding Virginia back is bad economics and bad policy.

An analysisreleased this month shows wind and solar could replace 74 percent of coal plants nationwide at an immediate savings to customers; by 2025, that number will be 86 percent. Major utilities like Xcel and MidAmerican have targeted 100% renewable energy, saving money for customers in the process.

Meanwhile, voters across the country—and in Virginia—support renewable energy over fossil fuels by wide margins. Even polling by conservative groups shows strong support for clean energy.

It simply makes no sense for Virginia to opt out of the clean energy future. No doubt a lot of Republicans will vote to do it anyway in hopes of denying a win to a Democratic governor. But if they do, they run the risk of their constituents holding them accountable come November.

This article originally appeared in the Virginia Mercury on April 2. It has been updated to include DEQ’s response to the SCC staff’s letter.

Update April 4: Disappointingly but not surprisingly, the Governor’s amendments were defeated along party lines yesterday. If he wants to keep the carbon regulations moving towards implementation, he will have to exercise his veto authority. There have been questions raised about his authority to do that, so stay tuned.