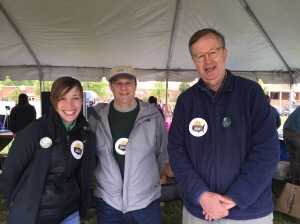 Clean energy advocates in Virginia know we are engaged in a steep uphill climb, and are still so far from the top that we have only a general idea of what it will look like. But activists in Arlington and Alexandria believe it’s time for bold leadership. They are calling on their communities to set a goal of 100% clean and renewable electricity by 2035.

The Ready for 100 Campaign launched today as part of a push by the Sierra Club to show that a future without fossil fuels is achievable. Sierra Club volunteers are working with community groups and other leaders to promote the benefits of clean energy locally. According to Seth Heald, Chair of the Virginia Chapter of the Sierra Club, fifteen U.S. cities, including San Diego, CA, Georgetown, TX, and Columbia, MD, have already committed to 100% clean energy.

Arlington County already has a reputation for its leadership in the energy sector, with a commitment to reduce its greenhouse gas emissions by 80% by 2050 and a number of innovative programs to reduce energy consumption. Now, says Heald, it is time for Arlington to take the next step to “eliminate the fossil-fuel generated pollution that comes from electricity production and is damaging our health and undermining our quality of life.”

Arlingtonians for a Clean Environment (ACE) has signed on as a partner in the effort. “Arlington County has already set a high bar for Virginia, but we can do even better,” said Executive Director Elenor Hodges. “I think this is an effort many residents will get behind.”

“Our current dependence on fossil fuels means that my generation will be dealing with the impact of climate change for our entire lives,” said Helene Turvene a junior at Washington-Lee High School. “A commitment now to 100% renewable energy not only will help to begin reversing those impacts, but it will position our community for a more sustainable future. Students want to know that local leaders are acting with us, and future generations, in mind.”

Alexandria residents are also behind the effort. Samantha Adhoot is an Alexandria-based pediatrician who has often sounded the alarm about the effects of climate change and fossil fuel pollution on children’s health. “By transitioning to 100% clean energy, our city could prevent thousands of asthma attacks and dozens of premature deaths every year,” she said. “This would be a big step in the right direction toward allowing our kids to breathe easier.”

Although the 2035 goal is long-term, the campaign’s benefits could be immediate. The solar industry now employs over 200,000 people nationwide, and with fewer than 1% of them in Virginia, we have tremendous room for growth. And of course, investments in energy efficiency mean savings on utility bills that keep adding up. Stanford scientists say the transition to 100% renewable energy will save the average American family $260 dollars per year in energy costs, and another $1,500 per year in health care costs.

Taylor Bennett, Community Outreach Coordinator for the Ready for 100 Campaign, is hoping to hear from others who want to join the effort. She can be reached at Taylor.Bennett@SierraClub.org. 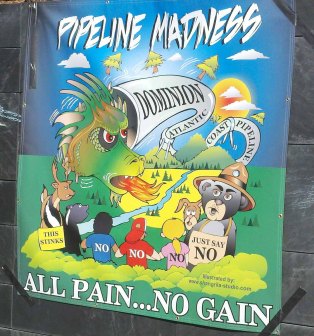 Dominion Resources’ plan to use the captive ratepayers of its electricity subsidiary to guarantee a customer base for its Atlantic Coast Pipeline venture has caused critics—including me—to complain that the scheme presents a clear conflict of interest. According to a complaint filed with the Federal Trade Commission (FTC), it’s also a violation of federal antitrust laws.

Lawyer Michael Hirrel, who retired last year from the Antitrust Division of the U.S. Department of Justice, has asked the FTC to investigate “whether ACP’s project constitutes a prohibited monopolization by Dominion, Duke and Piedmont, under Section 2 of the Sherman Act, and an unfair method of competition, under Section 5 of the Federal Trade Commission Act.”

Dominion Virginia Power is currently engaged in an aggressive build-out of natural gas generating plants, with three new units representing 4,300 megawatts of generating capacity, coming online between 2014 and 2019. The company’s latest integrated resource plan and presentations to stakeholders reveal plans for over 9,000 megawatts more. By comparison, the company has promised a mere 400 megawatts of solar.

Where there are gas plants, there must be gas, and this massive build-out means a guaranteed stream of income for the lucky owners of gas transmission pipelines. The fact that one such pipeline is partly owned by Dominion Virginia Power’s parent corporation is clearly a conflict of interest. Because Dominion holds a monopoly on electricity sales, its customers will be stuck paying for gas—and guaranteeing a revenue stream for pipeline owners—for decades to come.

This is a bad deal for customers and the climate, but according to Hirrel, it is also anticompetitive and warps the normal decision-making of the companies involved.

(In addition to Dominion Resources, the other owners of the Atlantic Coast Pipeline are Duke Energy, Piedmont Natural Gas and AGL Resources. AGL is being acquired by Southern Company, meaning three of the four partners own electricity subsidiaries that are regulated monopolies that can stick ratepayers with the cost of paying for gas. As for the fourth partner, Piedmont is a regulated monopoly distributor of natural gas. Just to make things even more cozy, Piedmont is being acquired by Duke.)

Hirrel’s complaint notes: “If Dominion, Duke and Piedmont were to acquire their gas and its transportation, plus electricity generation, in competitive markets, they would, the Commission must suppose, engage in a very different decision making process. But that process will be rendered moot when they acquire and transport their own natural gas, and generate their own electricity. They will distribute the electricity and gas to their own monopoly retail customers, who have no alternative. Those customers must pay the costs of Dominion, Duke and Piedmont’s decisions, whether the costs were efficiently assumed or not.”

Hirrel also points out that in a truly competitive market, Dominion and Duke might not pursue a natural gas strategy at all, because of the economic risks involved. They might, for example, consider whether investments in wind and solar would be more economical and avoid the potential for stranded investments.

“But in the present universe,” he concludes, “the one in which Dominion, Duke and Piedmont propose to become the monopoly suppliers of the inputs for their own monopoly customers, they need not engage in any such economically efficient decision making process. If they make bad decisions, they will not suffer. The costs of those bad decisions will be borne by the monopoly customers of their retail electricity and natural gas distribution systems.”

I called Mr. Hirrel to ask what action he expects the FTC to take. He says the Commission typically takes anywhere from two weeks to two months to determine whether to open an investigation when it receives a complaint like this. If it chooses to investigate, it may also ask the Federal Energy Regulatory Commission (FERC) to delay its approval process for the ACP pending conclusion of the FTC investigation.

Hirrel copied FERC on his complaint, making it a public document within the ACP docket (CP15-554).

Update: on June 23, the Virginia Chapter of the Sierra Club submitted a letter to the FTC providing further information supporting the antitrust complaint. The letter and supporting documents can be found at http://wp.vasierraclub.org/LetterInFull.pdf.