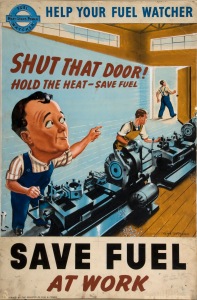 Energy efficiency: it’s the resource that everyone praises and few pursue. If Dominion Virginia Power approached efficiency programs with the enthusiasm it devotes to building natural gas plants, then—well, it wouldn’t need the new gas plants.

And that’s the crux of the problem. Virginia’s utilities earn more money by building stuff than by not building it, and the excuse to build new stuff comes when demand for electricity increases. If people use less electricity—say, by buying more efficient lighting and appliances—that’s good for consumers, but bad for utility profits.

The Virginia State Corporation Commission hasn’t helped matters; it takes a skeptical view of utility-sponsored energy efficiency programs, rarely approving the kind of programs that would be needed for Virginia to make progress towards its modest goal of lowering electricity use 10% by 2022. Changing the SCC’s attitude through legislation is hard; doing so without the support of the utilities is impossible.

This is where the Governor finds his opportunity for modest progress. Terry McAuliffe has been very, very good to Dominion. He’s supported its fracked-gas pipeline, its budget-busting nuclear ambitions, its new gas plants, and even the rate boondoggle it secured last year that allows it to pick the pockets of Virginia ratepayers to the tune of a billion dollars.

The legislation replaces an ineffective lost-revenue provision in the Code with an incentive-based approach intended to reward investor-owned utilities for success. According to a fact sheet the Administration is sharing with legislators, the utilities will reap bonuses in proportion to the amount of energy saved through implementing cost-effective programs:

These two Administration bills have the most momentum behind them, but they are not the only legislation out there looking for ways to make serious energy efficiency gains. The best of the bills is HB 576 (Rip Sullivan, D-Arlington, in Commerce and Labor). It requires the SCC to approve cost-effective efficiency programs and, more significantly, establishes robust new energy efficiency goals that utilities would be required to meet.

Sullivan has clearly spent a lot of time this year thinking about the policy barriers to energy efficiency. He correctly pegs SCC procedure as one of the problems.

HB 575 (in Commerce and Labor) as well as HB 352 (Lee Ware, R-Powhatan, also in Commerce and Labor) take aim at the way the SCC evaluates energy efficiency programs. Sullivan’s bill would make it easier for a program to meet the SCC’s standards. As currently written, Ware’s would actually make it harder; however, we hear this may be a drafting error, so we will be watching for amendments that would make this a bill to support.

Freshman Delegate John Bell (D-Chantilly) has introduced a modest bill of such remarkable common sense that it shouldn’t be needed (but is). HB 808 requires government agencies to use LED light bulbs instead of incandescent bulbs when installing, maintaining or replacing outdoor light fixtures. The bill has been referred to the Committee on General Laws.

It’s also worth noting that two bills I previously included in the roundup of climate-related legislation would also have a significant impact on energy efficiency investments. HB 351 (Ron Villanueva, R-Virginia Beach, referred to Commerce and Labor) and SB 571 (Donald McEachin, D-Richmond, referred to Agriculture) would direct the Governor to join the Regional Greenhouse Gas Initiative (RGGI), the cap-and-trade plan that the northeastern states have used successfully to reduce carbon emissions and raise funds to further the RGGI goals. In Virginia, these funds would include millions of dollars for energy efficiency.