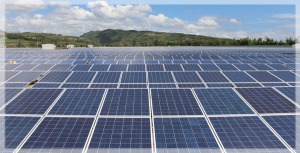 Last October, Virginia’s State Corporation Commission turned down an application from Dominion Virginia Power to build a 20-megawatt solar facility on land it owns near Remington, Virginia. The SCC told Dominion it had failed to meet its statutory obligation to consider third-party market alternatives that could save ratepayers money.

Rather than going back to the drawing board, we learned today that Dominion has found another way to build the project. In what is being billed as a “public-private partnership,” Dominion will sell the power from the project to the state of Virginia, and then will sell the associated renewable energy certificates (RECs) to Microsoft to help it meet its renewable energy goals for its data centers.

Governor McAuliffe announced the deal today at an event in Richmond, touting its ability “to reduce Virginia’s carbon emissions and diversify our energy portfolio.”

The deal seems to offer a great outcome for Dominion and Microsoft. A Dominion spokesperson told me the company will have to file a new application with the SCC for a certificate of public convenience and necessity, which they anticipate doing in May. But with no ratepayer impact now, they don’t expect the SCC would deny it this time around.

In this way, Dominion avoids having to consider less expensive means of acquiring solar energy, such as power purchase agreements or bids from third party developers.

The announcement did not say whether the state would pay a premium for power generated at the Remington site. It is also not clear how the deal relates to Governor McAuliffe’s goal, announced last December 21, of having the state derive 8% of its electricity from solar energy within three years. Legally, if Microsoft buys the RECs from the Remington project, the state cannot claim to be purchasing solar energy. So we hope the Governor has not been misled into thinking the state is buying solar energy with this deal.

As a general matter, though, supporting a large solar project fits well within the Governor’s ambitious jobs agenda, and it may be money well spent if it leads to more projects and greater investment. Certainly it beats handing out tens of millions of dollars annually to an ever-shrinking coal industry, as Virginia still does.

But we should keep this 20 MW project in perspective. North Carolina installed 1,134 MW of solar in 2015 alone. And meanwhile over at the SCC, Dominion is awaiting approval of its latest natural gas plant, the 1,600-MW Greensville Power Station, which will increase Virginia’s CO2 emissions by much more than the Remington project could possibly reduce them.

Which is to say, the further we go, the behinder we get.