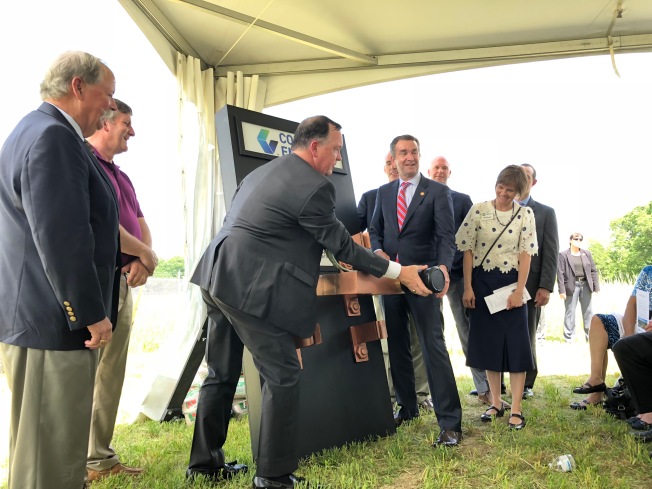 CVEC president and CEO Gary Wood and Virginia Governor Ralph Northam work together to flip a giant plastic mock-up of a switch at the opening of the Palmer Center.

Rural electric cooperatives are not generally known as hotbeds of progressive energy policy. So when coops start installing solar farms to serve their members, it’s clear we’ve arrived at a turning point in Virginia. Solar has gone mainstream.

Not that anyone is blasé about it. The CEO of Central Virginia Electric Cooperative (CVEC), Gary Wood, was bursting with pride this week at the commissioning of CVEC’s first two solar farms, which together form the largest solar project for a distribution cooperative in Virginia to date. Governor Northam was also on hand to praise the jobs and clean energy associated with solar and to help “flip” a big plastic mock-up of a switch.

The story was all about keeping it local: The 5 megawatts (MW) of fixed panels at the Martin Center sit on 35 acres in Kents Store, Virginia, in the heart of CVEC territory. Twelve miles away in Troy, the Palmer Center boasts its own 5 MW of panels on 41 acres, with these using single-axis tracking.  Both solar farms are on land belonging to the Palmer family; Grover Palmer worked for CVEC for 39 years. 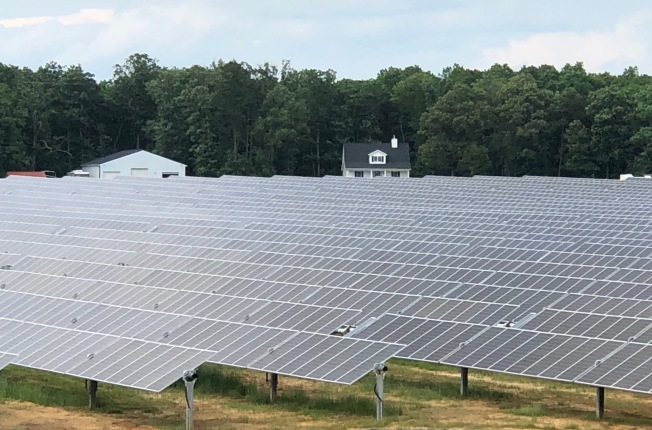 The solar panels at the Palmer Center will track the sun throughout the day, producing more electricity than the fixed-tilt arrays at the nearby Martin Center. How much more? We’ll be interested in finding out.

The developer and project owner, Coronal Energy, is based nearby in Charlottesville and hired local workers for the project. Coronal will continue to own and operate the solar farms for the 25 years of the power purchase agreement.

More importantly, the electricity the solar farms produce will be used locally by the coop’s customers. Most of the solar will be added to the power mix serving all 36,000 members, but 4 MW has been designated to supply an optional “community solar” program CVEC is calling Solar Share. CVEC Board Chair H.T. Brown said the program is the first such program to get approval from the State Corporation Commission under legislation passed in 2017.

Customers who want to participate in the Solar Share program can subscribe for up to 250 kilowatt-hours per month in blocks of 50 kWh, with each block costing $4.50 (plus transmission costs). This replaces an equal amount of ordinary “brown” power they would otherwise buy from the grid. The cost for solar under the program will be 1.4 cents/kWh higher than the standard rate, but subscribers are guaranteed that the solar portion of their bill won’t increase for the next 25 years. That is not a deal you can get anywhere for electricity from fossil fuels.

Of course, most customers use a lot more than 250 kWh per month. Wood said CVEC imposed the limit to allow as many customers as possible to enroll. The supply is limited to 11,000 blocks, and demand is strong. Melissa Gay, Communications & Member Service Manager for CVEC, told me customers were allowed to begin signing up at midnight on March 29. The first sign-up came at 12:02. Less than two months later, the program is 30 percent subscribed, with an advertising campaign not yet begun.

CVEC is not the first Virginia coop to offer a community solar program; BARC Electric Cooperative earned that distinction in 2016. Like CVEC, BARC’s program uses 50 kWh blocks that are priced a little higher than brown power initially ($4.95 per block in BARC’s case) but won’t increase over time.

But whereas BARC built its 550 kW system specifically for community solar, Gay told me the Solar Share program wasn’t even part of CVEC’s planing originally. The coop had wanted to add solar to its resource mix because it was a good deal for everyone. Customer demand led to the decision to carve out 40 percent of the solar contract for community solar.

And that is the beauty of the coop model when it listens to its members. For CVEC, solar just makes sense.