The rap on renewable energy is that it’s too variable to meet society’s demand for a constant supply of electricity. The answer to the problem turns out to be: More renewables. 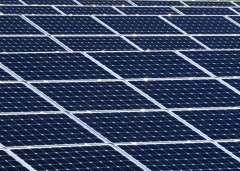 Climate change is acting like an ever-tightening vise on our energy options. Each year that passes without dramatic decreases in our use of carbon-emitting fuels means the cuts we have to make simply get more drastic. By 2030, say experts, we must entirely replace coal with efficiency and renewable energy, or fry. Even the most intrepid environmentalists wonder if it can be done without huge price hikes and wholesale changes in how we live and use energy–changes that society may not accept.

A new study out of the University of Delaware shows it is possible to power the grid 99.9% of the time with only solar and wind energy, at a cost comparable to what we are paying today. This counters the conventional wisdom that we will always need large amounts of fossil fuel as a backup when the wind doesn’t blow and the sun doesn’t shine. It also means the goal of getting largely beyond fossil fuels by 2030 is not just achievable, but practical.

The study focused on a regional transmission grid known as PJM, which encompasses parts or all of fourteen states, mostly in the Mid-Atlantic. Researchers ran 28 billion computer simulations to find the most cost-effective combinations of wind and solar that could power the entire grid, at the least possible cost and with minimal amounts of energy storage. The winning combination relied on natural gas turbines for backup on only five days out of the four years modeled.

The study authors looked for the least cost taking account of carbon and other external costs of fossil fuels, which are not being accounted for today, but they also assumed no technology improvements over time, making their cost estimates conservative overall. All the least-cost combinations used much more storage than we have today, but needed it for only 9 to 72 hours to get through the entire four years modeled.

The secret to dealing with the inherent variability of wind and solar, it turns out, is to build even more wind and solar. One wind turbine is unreliable, but tens of thousands spread across a dozen states greatly reduces the variability problem, and tens of thousands of wind turbines balanced with millions of solar panels is better still. To get to 99.9% renewables, you keep adding wind turbines and solar panels until you are producing three times the electricity that you actually need to meet demand. To power the grid with renewables just 90% of the time, you would have to produce “only” 1.8 times the electricity needed. (And yes, we have the windy sites and the sunny places to support all those projects.)

While it may sound strange to build more generation than you need, that is already the way grid operators ensure reliability. To take one example, if you were in Virginia when the “Big One” struck in 2011, you will recall that the earthquake caused the North Anna nuclear plant to shut down for four months. Nuclear energy provides a third of the electricity in Dominion Virginia Power’s service territory, and yet the lights stayed on. That’s because the grid wizards at PJM simply called on other power sources that had been idle or that had spare capacity.

The other component of reliability is the ability to match demand for power, which rises and falls with the time of day, weather, and other factors. So-called “baseload” plants like nuclear, coal, and some natural gas turbines don’t offer that flexibility and must be supplemented with other sources or stored energy. PJM currently uses more than 1,300 different generating sources, as well as about 4% storage in the form of pumped hydro. The right combination of other sources can replace baseload plants entirely.

Pairing wind and solar improves their ability to meet demand reliably. Onshore wind tends to blow most strongly at night, while solar energy provides power during the peak demand times of the day. Offshore wind power is also expected to match demand well. Combining them all reduces the need for back-up power.

But until now policy makers have assumed that solar and wind won’t be able to power the grid reliably, even when combined and spread out over PJM’s more than 200,000 square miles, and with the addition of wind farms off the coast. Critics have insisted that renewable energy requires lots of back-up generating capacity, especially from some natural gas turbines that can ramp up and down quickly. New gas turbines have even been designed specifically to integrate with renewables in anticipation of increasing amounts of wind and solar coming onto the grid.

This makes the work of the U. Delaware researchers a game-changer by showing that wind and solar can be backed up primarily by more wind and solar. And so we can begin planning for a future entirely without fossil fuels, knowing that when we get there, the lights will still be on.

8 thoughts on “For electric power generation, the end of fossil fuels is in sight”