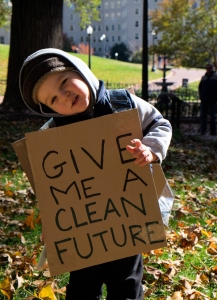 The EPA’s proposed Clean Power Plan could reshape Virginia’s energy future for the next fifteen years, and possibly permanently. If the state takes advantage of this opportunity, it will reduce carbon pollution, improve human health, save money for consumers, drive job creation in the fast-growing technology sector, and make our grid stronger and more secure.

If the state doesn’t act, EPA will design its own plan for Virginia, ensuring reduced carbon emissions but without the flexibility the state would have by doing it for itself.

This presents a conundrum for Virginia’s General Assembly, which is not known for embracing federal environmental regulations. The usual skepticism was on display on November 19, when the Senate and House Commerce and Labor Committees met in a joint session to take up the Clean Power Plan—or more precisely, to give utilities and the State Corporation Commission staff the chance to attack it.

At the conclusion of that meeting, the two Republican committee chairs, Senator John Watkins and Delegate Terry Kilgore, named three members of each committee—two Republicans and one Democrat from each chamber—to a special subcommittee tasked with deciding what kind of legislative action the General Assembly should take in response to the Clean Power Plan. Kilgore also put himself on the subcommittee, which will now take up any bills that Virginia legislators introduce related to the Plan.

This subcommittee has scheduled its first meeting for December 17 at 1:00 p.m. in Senate Room A of the General Assembly building in Richmond. By law, all committee meetings are open to the public.

According to General Assembly procedure, before anyone else in the entire legislature can consider a bill, it will have to pass muster with these seven men. So who are these hugely important people, and what is the likelihood that they will seize this historic opportunity to make Virginia a leader in clean energy?

The Senate members consist of Republicans Frank Wagner and Benton Chafin and Democrat Dick Saslaw. Wagner and Saslaw were obvious choices given their seniority on the committee and active role on energy issues. Chafin—well, we’ll get to him in a moment.

Frank Wagner is from Virginia Beach and is known for his interest in energy generally, and especially in promoting new projects. He sponsored the legislation that led to the Virginia Energy Plan in 2006 and has been an important supporter of offshore wind development, perhaps reflecting his undergraduate degree in Ocean Engineering and his Tidewater residence.

The General Assembly website says Wagner is the president of Davis Boatworks, a vessel repair facility whose principal customer is the Defense Department. Living in the Hampton Roads area, Wagner is aware of how real sea level rise is; presumably he understands the connection to climate change.

In spite of his interest in offshore wind, coal rules when it comes to funding Wagner’s political campaigns. The Virginia Public Access Project shows coal giant Alpha Natural Resources was Wagner’s second-best donor over the years, with a total of $43,643 in campaign money since 2003, ahead of Dominion Power’s $37,350. Energy and mining interests combined gave gifts totaling $188,152. Of this, $350 came from Highland New Wind Development LLC back in 2008 and $250 came from the offshore wind company Seawind in 2010.

Of course, who gives money to an elected official does not necessarily dictate how that official votes. But it probably should be mentioned that for the 2014 session, Wagner earned an F on the Sierra Club’s Climate and Energy Scorecard, disappointing clean energy advocates who have sometimes had reason to see him as an ally.

Also a low performer on the energy scorecard is Dick Saslaw, scraping by with a D. Saslaw is a career politician who was first elected to the GA in 1976, when he was 36. (He is now 74.) His biography lists his background as an owner and operator of gas stations.

Saslaw is the Senate Democratic Leader and used to be Chair of the Senate Commerce and Labor Committee, until his party lost the Senate. In theory, his leadership position in the Democratic Party should make him a defender of President Obama’s climate initiative. In practice, not so much.

Although he is a Fairfax County Democrat, Saslaw does not share his constituents’ enthusiasm for wind and solar, nor in general, their concern for the environment. Somebody once told him that renewable energy costs a lot; that’s been his story ever since, and he’s sticking with it, facts be damned.

Saslaw is proud of his close ties to Dominion Virginia Power, whose interests reliably predict his votes on any given bill. The Virginia Public Access Project reports that Dominion has given more money to Saslaw than to any other legislator. In 2014 alone, Dominion gave Saslaw $25,000. Over the years, Dominion’s contributions to Saslaw have totaled $240,508, making the utility Saslaw’s top donor.

Saslaw has also received more money from Appalachian Power than any other Democrat–$44,000–even though that utility does not provide service anywhere in his district. In addition, coal interests gave him $90,250, natural gas companies ponied up $50,250, and the nuclear industry chipped in $28,000.

A single contribution of $250 makes up the only entry under “alternative energy.”

This brings us to new Senator Ben Chafin, the Republican delegate from Southwest Virginia who replaced Democratic Senator Phil Puckett (he of the Tobacco Commission scandal). Chafin is a lawyer and farmer, and as his website informs us, “Ben Chafin has a proven record fighting for the coal industry. Ben sponsored successful legislation (House Bill 1261) to fight against Obama EPA’s effort to kill the industry through over-regulation. Ben will continue to work in Richmond to protect coal and grow other Southwest industries like natural gas.”

Not surprisingly, coal interests led all other industry donors to Chafin’s 2013 campaign for Delegate and his 2014 campaign for Senate ($59,000 altogether), though he did pretty well by natural gas, too ($14,150). As a delegate, Chafin earned a gentleman’s C on the Sierra Club scorecard, but it would probably be a mistake to pin our hopes on his becoming a clean energy champion. His role on the subcommittee is surely to give Coal a voice.

On the other hand, Chafin must recognize that the economics of fracked gas and ever-more competitive wind and solar means Virginia coal has no chance of ever regaining its former glory. Southwest Virginia now needs to craft a strategic retreat from mining and work on economic diversification. That’s not inconsistent with the Clean Power Plan.

On the House side—but here I have to digress for a moment to comment on the seemingly random composition of the House Commerce and Labor Committee. The Senate side is bad enough; any Democrat who has evinced environmental sympathies over the years has been dumped from the Senate Commerce and Labor, and when he was in power, Saslaw did a lot of the dumping.

But it’s worse over at the House. The leadership keeps reshuffling its energy committee, as if in a frantic effort to make sure nobody learns anything, while the delegates who actually came to the job with an interest and knowledge of energy never seem to get a turn. Energy law is a hard area to learn. It’s complicated, and if you don’t have time to master it, you are even more likely to accept guidance from either the party leader who tells you how he wants you to vote, or the glib industry lobbyists who assure you they have the public’s welfare at heart just as much as you do. (Plus they give you money!)

So Chairman Terry Kilgore had little enough to work with on his committee. The three delegates he named to this incredibly important subcommittee, though they are undoubtedly smart and hardworking people, bring no discernable expertise on either climate or energy to the General Assembly’s review of the Clean Power Plan.

That’s awfully good money for a safe seat, and his votes have reflected it. His energy votes earned him a D on the Sierra Club scorecard. It’s unlikely that he will abandon his coal friends, but like Senator Chafin, he will serve his constituents best if he works to attract new business to his struggling region. Home weatherization and energy efficiency programs would be popular there, and solar energy is one of the fastest-growing industries in America.

The other House subcommittee members Kilgore appointed are Republicans Jackson Miller and Ron Villanueva and Democrat Mathew James. Jackson Miller is a Manassas Realtor and former police officer who has been in the House since 2006. The bills he has introduced primarily reflect his interests in real estate and criminal law, although he also introduced legislation supporting uranium mining. He has received a total of $79,252 from energy and mining companies since 2010, primarily electric utilities, natural gas, coal, nuclear, and uranium. He earned a D on the Climate and Energy Scorecard. Why he is on this subcommittee is anyone’s guess, but certainly Northern Virginia stands to gain a lot of technology jobs if the state develops its clean energy industries as it should.

Virginia Beach Republican Ron Villanueva has not been as popular with the energy and mining companies, whose donations to his campaigns have totaled $20,550. Villanueva’s website says he was the first Filipino-American elected to state office in Virginia when he became a delegate in 2009. Villanueva has been friendly to the solar industry, and while he received a D on the scorecard, he also received an award from the Sierra Club for his work on a bill to provide a tax credit for renewable energy projects. (The bill was converted to a grant in the Senate but not funded.)

Like Delegate James and Senator Wagner, Villanueva lives in an area that is feeling the effects of climate change sooner than any other part of Virginia, so his constituents know how much the Clean Power Plan matters. For that matter, his day job as a partner with SEK Solutions, a military contractor, should mean he’s aware of the Pentagon’s focus on climate change as a national security issue, as well as a threat to its coastal assets.

Portsmouth Democrat Matthew James also hasn’t been especially popular in the energy industry. Since 2009, when he first ran for delegate, he has accepted a mere $5,000 from Dominion, $3,500 from coal interests, and $3,350 from the natural gas companies—token amounts by Virginia standards, but they may be due for a sudden increase.

James does not seem to have introduced any energy-related bills. However, his votes earned him an A on the Sierra Club scorecard. James is listed as the President and CEO of the Peninsula Council for Workforce Development. Maybe he will see an opportunity in the Clean Power Plan to develop jobs in the solar, wind, and energy efficiency industries, which have outperformed the economy generally.

So there you have the five Republicans and two Democrats who get first crack at any bill either facilitating Virginia’s compliance with the Clean Power Plan, or hostile to it. If they like a bill, it moves to the full Commerce and Labor committees. If they scuttle a bill, no one else in the entire legislature will get to vote on it.

That’s how it works, or doesn’t, in the Old Dominion.