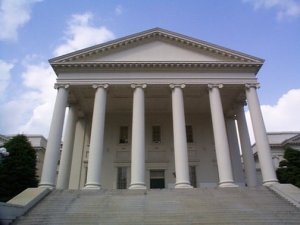 I’m starting my review of 2015 energy legislation with a look at bills dealing with renewable energy and energy efficiency. Most of these bills will be heard in the committees on Commerce and Labor, though bills that cost money (tax credits and grants) usually go to Finance.

Bills referred to Senate Commerce and Labor are heard by the full committee, which meets on Monday afternoons. It consists of 14 members: 11 Republicans and 3 Democrats. They form a tough lineup; none of these senators received better than a “C” on the Sierra Club’s Climate and Energy Scorecard.

The House bills are typically assigned to the 13-member Special Subcommittee on Energy (10 Republicans and 3 Democrats, no fixed schedule). Bills that do not meet the approval of Dominion Power can expect a quick death here on an unrecorded voice vote, never to be heard from again. But on the plus side, the meetings are often quite lively, like old-fashioned hangings.

Net metering is the policy that allows owners of solar (or other renewable) energy systems to be credited for the excess power they feed back into the grid when the systems produce a surplus; the owners use the credits when their systems aren’t supplying power and they need to draw electricity from the grid. Virginia law restricts who can use net metering, and how much. Expanding net metering is a major goal of renewable energy advocates, who argue it offers a free market approach to growth—give customers the freedom to build solar projects, get the utility out of the way, and solar will thrive.

This year’s initiatives include:

HB 1925 (Lopez) and SB 1160 (Edwards) replace the current PPA program in Dominion territory with one that applies to both Dominion and APCo territories. It increases the project cap from the current 500 kW to 1 MW, and raises the overall program size to 100 MW from (50 MW). As with the current program, projects under 50 kW aren’t eligible unless the customer is a tax-exempt organization.

HB 2219 (Yost) declares it to be in the public interest for Dominion Virginia Power or Appalachian Power to build up to 500 MW of solar power—a truly welcome objective—and authorizes the utilities to apply to the SCC for a certificate of public convenience and necessity for individual facilities of at least 20 MW in size, regardless of whether the facility is located in the utility’s own service territory.

“In the public interest” are the magic words that push the SCC to approve something it might not otherwise. Both utility giants have shown an interest in building and owning utility-scale solar, even as they have taught the SCC to believe that solar owned by anyone else burdens the grid. The magic words let them escape the corner they backed themselves into. That would be necessary here, given that our SCC wrongly believes the public interest requires the lowest cost energy regardless of the consequences to public health, the environment, national security, and the economy.

The solar industry has two concerns about HB 2219: the effect on ratepayers, since Dominion’s previous solar efforts have cost well above market rates; and the effect on the Virginia solar industry—or rather, the lack of an effect, since Dominion has hired only out-of-state companies. Virginia ratepayers could save money and the state could build more solar if legislation simply required the utilities to buy 500 MW of solar, and let the market decide who builds it. But of course, that’s now how things work in Virginia.

I also think it is unfortunate that the bill allows utilities to build solar plants that are not in the utilities’ own service territories, and that it does not require them to use Virginia contractors. Surely there would be more support for a bill promising projects that support local economies with jobs and tax revenues, and that requires the hiring of local installers. These seem like small enough things to ask.

HB 2237 (Yancey) allows Dominion or APCo to recover the costs of building or buying a solar facility in the state of Virginia of at least 5 MW, plus an enhanced rate of return on equity, through a rate adjustment clause. It also states that construction or purchase of such a facility, and the planning and development activities for solar energy facilities, are in the public interest. (The magic words again.)

This bill doesn’t require anything or make huge changes. It simply treats solar the way the Code currently treats other forms of generation, with the exception that the “in the public interest” language was previously used only to endorse a coal plant (what became the Virginia City Hybrid Energy Plant in Wise County). And note that this bill requires that the facility be in Virginia, and opens up the possibility of our utilities buying the facility rather than constructing it themselves, which could open the door to competition. This seems like a good way to proceed.

HB 1728 (Sullivan) establishes a tax credit for renewable energy. Great idea, but last year the Senate Finance Committee made it clear they would not pass a new tax credit, so I assume this is a non-starter.

Last year’s renewable energy tax credit bill was amended to create a grant program instead. It passed both houses, but without funding and with the requirement that it be passed again this year. It is back this year as HB 1650 (Villanueva). (It has been assigned to House Committee on Agriculture, Chesapeake and Natural Resources and is on the docket for 8:30 a.m. Wednesday, January 21. Odd: it ought to be in Finance.) The grant would equal 35% of the costs of a renewable energy facility, including not just wind and solar, but also things like biomass, waste, landfill gas, and municipal waste incinerators. Facilities paid for by utility ratepayers are not eligible, and the grant total is capped at $10 million per year. Prospects for the program aren’t great given the state’s tight budget situation, but the bill is a high priority for the solar industry.

Another tax-related bill is HB 1297 (Rasoul), which authorizes localities to charge a lower tax on renewable projects than on other kinds of “machinery and tools.” Last year, you may recall, the solar industry was successful in getting passage of a bill that exempted solar equipment entirely from local machinery and tools taxes. Proponents are trying to ensure that Delegate Rasoul’s well-intentioned bill doesn’t reverse last year’s victory on solar.

PACE (Property Assessed Clean Energy) is a way to finance energy efficiency, renewable energy and water conservation upgrades to commercial and non-profit-owned buildings. Local governments sponsor the financing for improvements and collect payments via property tax bills. Since the energy savings more than pay for the increased assessments, PACE programs have been hugely successful in other states.

Last year a bill that would have let localities extend “service districts” to cover clean energy (PACE by another name) failed in the face of opposition from the banking industry. This year’s bills are also not labeled PACE bills, but they achieve the same end. Apparently the parties have worked out the problems, a hopeful sign that a multi-year effort will finally meet with success.

SB 801 (Watkins) and HB 1446 (Danny Marshall) are companion bills that would authorize local governments to work with third parties to offer loans for clean energy and water efficiency improvements, creating “voluntary special assessment liens” against the property getting the improvements. The Department of Mines, Minerals and Energy would develop underwriting guidelines for local loans to finance the work. HB 1665 (Minchew) is similar, and we are told it will be conformed to HB 1446.

HB 1725 (Bulova) and SB 1099 (Stuart) establish the Virginia Solar Energy Development Authority to “facilitate, coordinate, and support the development of the solar energy industry and solar-powered electric energy facilities in the Commonwealth.” This implements a proposal in the 2014 Virginia Energy Plan and is not expected to be controversial.

HB 2075 (Toscano) requires the SCC to establish a registry for solar renewable energy certificates (SRECs). It would not suddenly make Virginia SRECs valuable, but it would put the administrative framework in place to support a voluntary SREC market, or even a real one if Virginia were to adopt legislation requiring utilities to buy solar power.

A few bills would have a more sweeping effect on energy efficiency and renewable energy. HB 2155 (Sickles) is billed as an “Energy Diversity Plan.” It was supposed to be a “grand bargain” between utilities and the clean energy industries, with the McAuliffe administration participating as well, but we understand there are outstanding issues that make the bill’s future uncertain.

The big idea is to put all non-emitting energy sources into one category: primarily wind, solar, hydro and nuclear, but also adding in combined heat and power, demand response and energy efficiency. The bill creates a timeline that requires utilities to ramp up use of new, non-emitting sources gradually, beginning with 0.25% of retail sales in 2016 and ramping up to 35% in 2030.

The bill has the support of clean energy industries, but the idea of treating nuclear as a benign source of power on an even footing with efficiency and renewables concerns the environmental community.

I’ll write more about this bill if it looks like it has legs.

HB 1913 (Lopez) is the only bill of the bunch that directly targets Virginia’s Renewable Portfolio Standard (RPS). Maybe that shouldn’t be a surprise. Our RPS is a poor, sickly thing that most people have left for dead. To his credit, Lopez keeps trying. His bill keeps the RPS voluntary but beefs up the provisions to make the program meaningful, if a utility chooses to participate. Instead of mostly buying renewable energy certificates from things like old, out of state hydro dams, the bill would ensure that actual, real-world renewable projects get built. You know, what an RPS is supposed to do.

In addition, the bill folds into the RPS the state’s existing goal of 10% energy efficiency gains by 2022. Utilities have done very little toward meeting this goal. Putting it into the voluntary RPS might be the prod needed to get more efficiency programs underway.

Or it might cause a utility to drop out. Either way, the result would be better than what we have now, where Virginia pretends to have an RPS, and utilities pretend to care.

Update: Another net metering bill has been filed. SB 1395 (Dance) raises the commercial net metering cap from 500 kW to 2 MW.