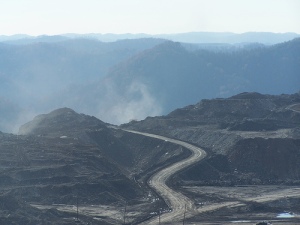 Your taxpayer dollars at work!

This should have been the year to end more than two decades of corporate welfare for companies whose business model involves the destruction of Virginia’s mountains. All the facts line up against the coal subsidies: the unremitting decline of coal employment since the 1990s, the waste of half a billion dollars that could have gone towards diversifying the southwest Virginia economy, the unfair advantage it gives coal over 21st century clean energy technologies that promise real job growth, and even all that anti-subsidy rhetoric from Republicans that ought to make them uncomfortable with crony capitalism and a blatant giveaway to a mature industry.

Delegate Toscano led a spirited charge against them that included a hard-hitting op-ed in the Richmond Times-Dispatch. But the coal companies whined in committee hearings, and Dominion’s Bill Murray explained that the utility supports making coal cheaper, saying ratepayers would benefit. (Since the money comes out of taxpayers’ pockets, and taxpayers are also presumably ratepayers, it’s a little hard to follow this logic. If you want to get your money’s worth, use more energy?)

No one but a few lonely environmentalists spoke up against the subsidies. Where are the clean energy businesses? Where is the Tea Party? Where are the people who actually care about the dire need for new industries and new jobs in southwest Virginia?

They certainly weren’t being heard in the General Assembly. By mid-week it was clear the giveaway will continue, though perhaps with one welcome change. Under HB 1879, reported from House Finance on Wednesday, the credit for the companies that mine the coal would have a limit on how much any given coal company can claim. However, the credit for those who burn coal is not limited and will actually be extended out to 2019, keeping coal’s unfair advantage over other fuels. (Like, say, renewable energy.)

SB 741, which passed the Senate 32-6 on Thursday, merely contains the extension of the subsidy for coal use out to 2019. So few Senators seem to have their heads on straight on this issue that it’s worth thanking them by name here: Adam Ebbin, Barbara Favola, Janet Howell, Mamie Locke, Donald McEachin, and Jennifer Wexton.

SB 1161 (Colgan), which also passed the Senate, contains the same limitation found in HB 1879. In this case, passing the bill was better than the status quo.

Update: On February 19, the Richmond Times-Dispatch reported, “The House of Delegates and state Senate have agreed to leave untouched a tax credit for electric utilities that burn Virginia coal, even though the policy reversal will create a $5.2 million hole in each chamber’s proposed budget. The House amended and passed Senate Bill 1161, introduced by Sen. Charles J. Colgan, D-Prince William, to include a substitute drafted by Dominion Virginia Power, the state’s largest power company.”