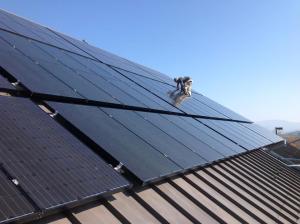 Appalachian Power Company (APCo) has spent the past two years ducking its Virginia customers who want the ability to buy solar power from third-party providers. This spring it finally unveiled what it claims will be the answer to their prayers: a bizarre, convoluted “Experimental Rider R.G.P.,” available only to certain larger customers like colleges and universities.

Under this proposal, a customer can arrange to have solar panels installed and owned by a third party developer but won’t be allowed to use the electricity or take advantage of net metering, as it would if it owned the system itself. The customer will have to continue buying dirty electricity from APCo, while the solar electricity the customer is also paying for is sold onto the grid, and the customer credited for its value according to a complicated and unfriendly formula. Instead of breaking even or saving money on electricity bills by going solar, the customer will pay substantially more.

By contrast, normally a customer who installs solar uses the solar electricity “behind the meter,” reducing the use of dirty electricity from the grid and saving money, especially if it had been paying high demand charges to its utility, as many institutions do.*

The limitations and poor economics of APCo’s proposal has would-be customers and solar advocates crying foul. According to an analysis by Professor Mark “Buzz” Belleville of the Appalachian School of Law in Grundy, VA, the program is so expensive that it’s not likely to get any takers. Worse, he concludes, “The [State Corporation Commission’s] approval of the proposal would actually be counterproductive to solar deployment in Virginia.”

That’s because “APCo will be able to claim that they made a [Power Purchase Agreement] program available, and the fact no one signed up shows that there is simply not a demand for PPAs in SW Virginia. Moreover, the SCC’s approval may strengthen APCo’s argument that PPAs are not legally permissible in APCo territory unless they are entered into pursuant to its SCC-approved program, and it will lay the groundwork for utilities to argue that a customer who has a PPA is not eligible for net metering under Va. Code §56-594.”

Understanding what’s at stake here requires a short history lesson. Back in 2011, a solar developer out of Staunton, Virginia, called Secure Futures LLC installed a solar array on a rooftop at Washington & Lee University. The parties used a popular financing approach known as a third-party power purchase agreement (PPA), which can let a customer go solar with no money down by having the developer keep ownership of the solar panels and sell the electricity they produce to the customer.

Federal tax rules make PPAs especially important for tax-exempt entities like colleges that can’t use the 30% federal tax credit for renewable energy facilities. When a for-profit solar developer owns a facility, however, it can take the tax credit and pass on the savings to the customer.

PPAs appeared to be explicitly authorized under Virginia law, but when Dominion Virginia Power got wind of the arrangement at Washington & Lee it moved quickly to block it, claiming a violation of its monopoly on the sale of electricity within its territory. Dominion’s weak legal position didn’t matter; the mere threat that the utility giant would unleash its army of lawyers was enough to stop the PPA in its tracks. The university completed its solar installation using an alternative, non-PPA approach.

Dominion had won the skirmish, but at a price. The utility took such a drubbing in the court of public opinion that it eventually acceded to legislation in 2013 establishing a limited “pilot program” under which not-for-profit entities and some commercial businesses can use PPAs, at least through the end of 2015. Secure Futures has gone on to develop additional solar projects in Virginia under the legislation, including at the University of Richmond and, under a just-announced deal, at six Albermarle County schools.

APCo, however, didn’t participate in the pilot program, and it has steadfastly resisted efforts to bring it into the fold, even in the face of mounting criticism. As Belleville pointed out in a Roanoke Times op-ed in March of 2014, the failure to extend the PPA law to residents of APCo territory put southwest Virginia at an economic disadvantage, closing it off to business opportunities that are available elsewhere in the state. Yet utility lobbying successfully defeated legislation this year that would have made PPAs explicitly legal statewide.

So southwest Virginia’s state of limbo persists, with many legal experts advising that PPAs are legal there under Virginia law, but most developers and customers unwilling to expose themselves to prolonged and expensive litigation to find out for sure. This state of affairs suits APCo very well. No doubt it calculates that the worst that can happen now is that the SCC rejects its rider and prolongs the state of limbo. Then the utility’s lobbyists will tell legislators it did its best to help customers but was prevented from doing so by that darned SCC.

APCo’s actions are those of a rational monopolist facing the threat of competition; it is easier to keep a competitor out of your market than it is to improve your product. But its efforts to throw roadblocks in the way of solar also reflect the suspicion, shared by many American utilities, that distributed solar generation benefits only the customer who installs it, at the expense of the utility and other customers. They believe this justifies them in making solar more expensive, even if it means preventing projects from being developed altogether.

This is a textbook example of cutting off your nose to spite your face, given the need for a rapid build-out of distributed solar generation to fight climate change and strengthen grid security. These are not considerations that hold much sway with Virginia’s SCC, however, so let’s confine ourselves to the cost argument.

The problem for APCo is that the notion that distributed solar increases costs for other ratepayers is mere conjecture, and neither APCo nor Dominion has offered any hard data to support it. Indeed, the only evidence from Virginia points the other way, according to Secure Futures CEO Tony Smith.

Since his company’s skirmish with Dominion, Smith has worked with a municipal utility, Harrisonburg Electric Commission (HEC), to study the financial impacts to the utility of Secure Futures’ first Virginia PPA project, a 104-kilowatt array installed in 2010 at Eastern Mennonite University in Harrisonburg (outside of Dominion territory).

The case study measured only the energy and capacity-related impacts of the solar array on the utility, ignoring the wide range of other benefits often considered in “value of solar” analyses. Analyzing three years’ worth of data, Smith found that the EMU array provided an average net benefit to the utility of $22.78 per kilowatt per year. The full technical analysis is available here. In an article soon to be published in the May/June issue of Solar Today, Smith writes:

Using a net benefit model developed in consultation with HEC management, we find that in the case of the EMU solar installation, the benefits to HEC outweigh the costs . . . Our net benefit results suggest that within HEC territory, solar installed for a commercial customer with demand exceeding 1,000 kW benefits all municipal utility stakeholders, including non-participants.

Certainly it would be interesting to repeat the analysis with data from more Virginia projects, including ones in APCo’s territory. But first, those projects have to get built. Right now that isn’t happening due to the PPA limbo. If APCo’s Experimental Rider gets approved—well, the projects still won’t get built, because no one will sign up.

The SCC case is No. PUE-2015-00040. An evidentiary hearing is scheduled for September 29 at the SCC offices in Richmond, Virginia.

*Residential customers don’t pay demand charges, making this an unfamiliar concept to many people. Demand charges (KW) are fees over and above the cost of energy usage (kWh) that are assessed according to a customer’s peak power requirements, measured as the highest peak demand in a given 30-minute period during the month. For many institutions, demand charges can exceed the cost of energy usage, and using solar electricity to reduce peak demand is often a compelling reason to look at solar in the first place.