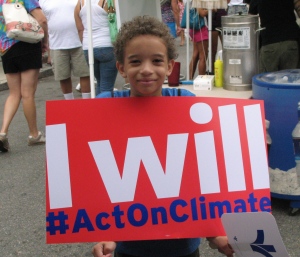 Must not be a Virginia Republican. Photo courtesy of Glen Besa.

Virginia Republicans have found a new way to obstruct development of a state plan implementing the federal Clean Power Plan: take away funding for it. A line inserted by House Republicans in the state budget will prevent the Department of Environmental Quality from using any funds “to prepare or submit” a state implementation plan unless the U.S. Supreme Court’s stay of the Clean Power Plan is released.

Governor McAuliffe is fighting back, but the approach he has taken is expected to fail in the face of Republican majorities in the House and Senate. He has responded by offering an amendment to the budget item, removing “prepare or” from the Republicans’ budget amendment. The result would retain the prohibition on submitting a state plan while the Supreme Court’s stay is in effect (a harmless prohibition since EPA won’t accept them for now anyway), but allows DEQ to continue developing the state plan.

McAuliffe’s amendment accords with his support for the Clean Power Plan and his pledge to continue development of an implementation plan even while the EPA rule is in limbo. He has already vetoed Republican-backed bills that would have required DEQ to submit any implementation plan to the General Assembly for approval before sending it to the EPA. These vetoes can only be overridden by a two-thirds majority, and Republicans don’t have the numbers.

But the budget amendment is doomed to fail. A governor’s budget amendment can be defeated by a simple majority vote. House Republicans are expected to vote in lock step to reject the amendment when the General Assembly reconvenes April 20.

Environmental groups had expected the governor to use a line-item veto to strip out the offending language. Doing so would have meant the Republicans couldn’t muster a two-thirds majority to overcome the veto. We’re told McAuliffe changed his approach on the advice of attorneys who felt a line-item veto invited a constitutional challenge. The result, though, is a loss for the Governor.

Worse, it means Virginia will lose time in crafting a plan to diversify and de-carbonize our electricity grid. As a coastal state on the front lines of sea level rise, Virginia has more to lose than almost any other state from our fossil fuel addiction. And for Virginia, compliance with the Clean Power Plan is so easy that it’s hard to listen to Republicans fuss without picturing tempests in teapots.

Obviously, Republican opposition to a plan to cut carbon is neither more nor less than an act of spite aimed at President Obama. But what have they gained with this maneuver? At most it’s a “win” for an old energy model built on obsolete coal plants owned by bankrupt corporations that have laid off thousands of workers and cut the benefits of retired miners while lavishing campaign cash on legislators and paying millions of dollars in executive bonuses. That’s not the kind of win you put on campaign posters.

The Sierra Club and other climate activists plan to call out the House Republican leadership for their budget maneuver with a rally at the Capitol at 10 a.m. on April 20, during the veto session. The event, fittingly, is called “Turn Up the Heat in the House.”