You’ve heard the good news on climate: after a century or more of continuous rise, U.S. CO2 emissions have finally begun to decline, due largely to changes in the energy sector. According to the Energy Information Agency (EIA), energy-related CO2 emissions in 2015 were 12% below their 2005 levels. The EIA says this is “because of the decreased use of coal and the increased use of natural gas for electricity generation.”

Is the EIA right in making natural gas the hero of the CO2 story? Hardly. Sure, coal-to-gas switching is real. But take a look at this graph showing the contributors to declining carbon emissions. Natural gas displacement of coal accounts for only about a third of the decrease in CO2 emissions. 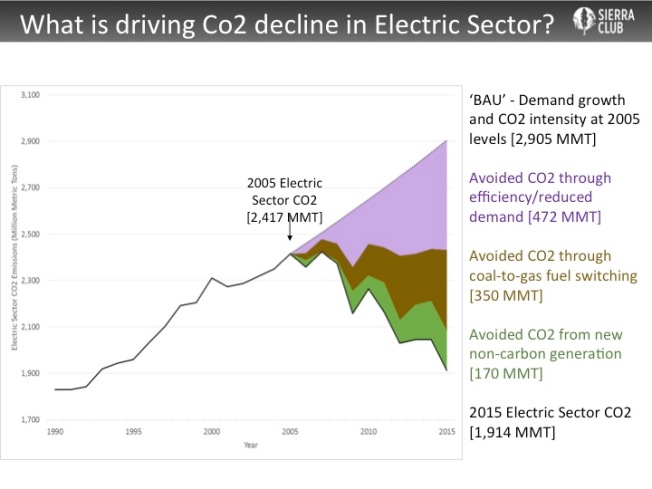 Courtesy of the Sierra Club Beyond Coal Campaign, using data from the Energy Information Agency.

By far the biggest driver of the declining emissions is energy efficiency. Americans are using less energy overall, even as our population grows and our economy expands

Energy efficiency is sometimes called the “first fuel” because cutting waste is a cheaper and faster way to meet energy demand than building new power plants. Improvements in energy performance cut across all sectors of the economy, from industrial machines to home electronics to innovations like LED bulbs replacing famously wasteful incandescent light bulbs.

Energy efficiency’s stunning success in lowering carbon emissions should get more attention, and not just because it is cheaper than building new natural gas-fired power plants. Efficiency has no downsides. Natural gas has plenty. Indeed, when methane leakage from drilling and infrastructure is factored in, natural gas doesn’t look much like a climate hero at all.

And that’s not the full story. A growing share of the credit for carbon reductions also goes to non-carbon-emitting sources, primarily wind, and solar. Both sources exhibit double-digit growth rates. Wind power in the U.S. has grown from a little over 9,000 megawatts (MW) in 2005 to more than 74,000 MW by the end of 2015. In 2005, the solar market scarcely existed. By early this year, we had 29,000 MW installed.

The solar trend is particularly exciting because we are just starting to see the big numbers that result from solar’s exponential growth. In the first quarter of 2016, more solar came online in the U.S. than all other power sources combined. Analysts like Bloomberg New Energy Finance see solar becoming the world’s dominant energy source over the next 25 years, driving out not just coal but also a lot of gas generation as solar becomes the cheapest way to make energy.

For an inspiring look at how this will happen, check out this presentation by author Tony Seba. As Seba argues, solar isn’t a commodity like fossil fuels; it is a technology like computers and cell phones. When technologies like these take off, they take over. Seba refers to solar technology, battery storage, electric vehicles and self-driving vehicles as “disruptive” technologies that are advancing together to upend our energy and transportation sectors.

Another graph shows us how critical these advancements will be. The U.S. is on track to achieve President Obama’s goal announced last year of lowering carbon emissions 17% below 2005 levels by 2020, but we will need more aggressive measures to meet our Paris Agreement target of 26-28% below 2005 levels by 2025. After 2025, of course, we will have to cut greenhouse emissions even further and faster. 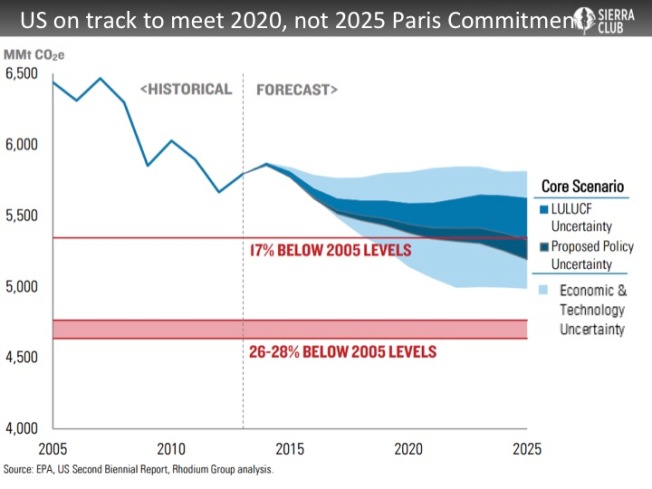 Given the urgency of the climate crisis, we don’t have the option of waiting around for the solar revolution to bankrupt the oil and gas industry and fossil-bound electric utilities. These companies will not go quietly; already they are maneuvering to lock customers into fossil fuels. Power producers are engaged in a mad rush to build natural gas plants, and wherever possible, to stick utility customers with the costs.

For Virginians who have felt especially under attack from fracked gas projects recently, this final graph shows it’s not your imagination: Virginia is second only to Texas in new gas plant development underway. And this graph captures only a fraction of the new gas that Virginia’s major utility, Dominion Virginia Power, wants to build. In presentations to state officials, it revealed plans for more than 9,000 megawatts of additional gas generating capacity. 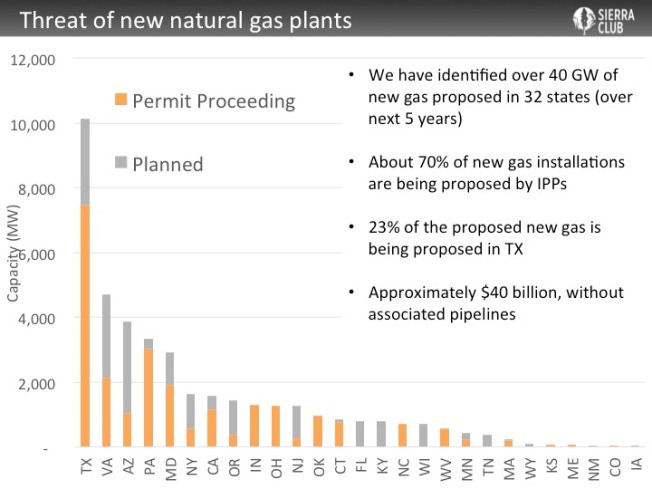 Based on Energy Information Agency data. Chart excludes natural gas generating units already under construction as well as those scheduled to come online after 2020.

Dominion and other gas-happy utilities are betting that once plants are built and consumers are on the hook, regulators won’t want to see them idled ten years from now just because renewable energy has made them obsolete.

Indeed, Dominion and other utilities, including Duke Energy, Southern Company, and NextEra in the Southeast and DTE Energy in the Midwest, even plan to use electricity customers to make money for the gas pipelines they are building, locking Americans further into gas.

This is madness. The only sound energy plan today is one that looks forward to an era of minimal fossil fuel use. It puts efficiency and renewables front and center, shifting natural gas and other fuels to supporting roles that will shrink over time.

The shift is inevitable. Delaying it means allowing the climate crisis to worsen, while sticking customers with higher bills for decades to come. That may suit some utilities just fine, but the cost is too high for the rest of us.