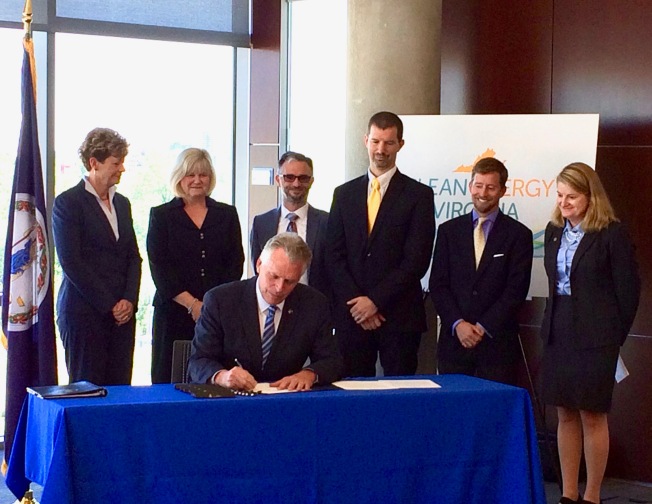 Terry McAuliffe dangled climate bait in front of Virginia Republicans, and they swallowed it hook, line and sinker.

Three weeks ago Governor McAuliffe announced he was directing the state’s Department of Environmental Quality (DEQ) to develop a rule capping greenhouse gas emissions from power plants. His Executive Directive gives DEQ until the end of December to put out a draft rule for public comment—meaning McAuliffe will be out of office before any rule takes effect, and its fate really lies with the winner of November’s gubernatorial election.

Democratic contenders Ralph Northam and Tom Perriello praised the initiative, but Republicans were too much in campaign mode to react rationally. Instead they went ballistic, ensuring that climate change will be an election issue in Virginia for the first time. Ed Gillespie, the frontrunner in the Republican primary, denounced the directive as “job killing and cost-increasing,” and used the opportunity to make common cause with coal companies. Corey Stewart called global warming “obviously a hoax” and promised to restore the taxpayer subsidies Virginia once lavished on the coal barons. Frank Wagner used his status as a state senator to convene a committee hearing so he could inveigh against McAuliffe’s directive.

Last week President Trump further elevated climate as an issue when he announced he was pulling the U.S. out of the international climate accord. ExxonMobil and ConocoPhillips criticized the move, but the Republican Party of Virginia celebrated it with a “Pittsburgh, not Paris” rally at the White House.

Only Virginia and New Jersey will elect governors in 2017, so our election is widely regarded as a bellwether for the 2018 federal electons. With almost 60% of Americans backing the Paris accord, Trump’s pullout—and the choice of Virginia Republicans to embrace an unpopular president over a divisive decision—makes McAuliffe’s directive look like a winning move for Democrats.

It is long past time for climate to become an important issue in national discourse. On the other hand, it’s painful to see it used as a political cudgel in partisan fights, and even worse to see Republicans double down on denying that a threat exists or that we have the tools to address it. Climate change is not something that happens only to one party’s target voter demographic. God sendeth the rain on the just and on the unjust. We are all in this together.

To be fair, there are Republicans who take climate change seriously and believe we need to address it. Unfortunately, the ones who hold elected office rarely have the courage to say it. Their party does not have their backs.

Political clickbait or not, the climate rule McAuliffe envisions is conceptually simple and economically efficient. It would have DEQ set greenhouse gas emissions limits from power plants pegged to those of the eleven states that currently regulate emissions, with a goal of enabling our utilities to trade emissions allowances with utilities in other states.

In effect, Virginia utilities would trade with those of the northeastern states that are members of the Regional Greenhouse Gas Initiative (RGGI), but Virginia would not actually join RGGI. That’s too bad; joining RGGI would let the state auction emissions allowances instead of giving them away, bringing in money for climate adaptation and clean energy programs. According to Deputy Natural Resources Director Angela Navarro, however, joining RGGI would require passage of legislation. Republicans in the General Assembly have blocked such legislation for the past three years in a row.

Auction revenue would be welcome, but the carbon reduction plan still makes sense. Navarro told me the RGGI states are currently achieving reductions of 2.5% year over year and driving clean energy investments. Using this approach would enable Virginia to achieve the 30% by 2030 reductions that the environmental community has been urging. It would also put Virginia in a stronger position when the U.S. eventually adopts nationwide carbon limits. Indeed, McAuliffe’s plan looks better than the Clean Power Plan the Trump administration is trying to scuttle, which applies only to existing power plants and might allow unlimited construction of new fracked gas plants.

A market-friendly cap-and-trade approach is the kind of solution that would appeal to Republicans, if they cared to get into the solution business. Unfortunately, Senator Wagner’s response is likely to be typical of what we can expect from Virginia’s Republican General Assembly when it reconvenes in January 2018. The ink was barely dry on McAuliffe’s directive when Wagner called a meeting of the Joint Commission on Administrative Rules to give himself a pre-primary platform to attack the climate initiative.

Wagner expected a member of the Administration to attend the meeting so he’d have someone to lecture—but wouldn’t you know, it turned out that every single Administration official with any connection to the issue was busy that day. That did not stop Wagner and his fellow Republicans from attacking McAuliffe’s directive as expensive and potentially unconstitutional. (Attorney General Mark Herring had released an opinion the previous week supporting its constitutionality.)

Democrats on the committee were unimpressed with Wagner’s grandstanding, and complained of being summoned to review a rule that hadn’t even been drafted yet. Even more to the point was the testimony from Virginia residents who came to speak in favor of climate action, not as a matter not of politics, but of public health. Dr. Janet Eddy of Virginia Clinicians for Climate Action and Dr. Matthew Burke of the Medical Society Consortium on Climate and Health described how a warming climate means more asthma and heat stroke, longer allergy seasons, and the northward spread of malaria and other infectious diseases.

These are serious problems, and they deserve serious attention. The Republican Party line that global warming isn’t happening, it isn’t our fault, and we can’t afford to stop has all the coherence of the thief who tells the judge he didn’t steal anyone’s wallet, and anyway there wasn’t much cash in it (and he can’t mend his ways because he has a gambling addiction).

Virginia voters will go to the polls on Tuesday to choose their party’s nominees for statewide office and the House of Delegates, so citizens are thinking about the issues that matter to them. The good news is that this year, climate may finally be one of them.

2 thoughts on “McAuliffe, on his way out, makes his bold move on climate–and drives Republicans crazy”