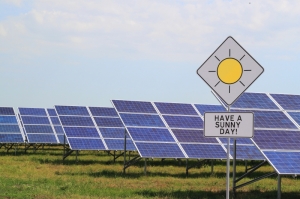 A review of the Virginia Department of Environmental Quality website reveals developers have at least started the permitting process for 64 solar farms across 40 jurisdictions, representing over 2,400 megawatts (MW) of solar capacity.

This includes projects that are already in operation, like the thousand-acre, 80 MW Amazon Web Services farm in Accomack that kicked off the solar gold rush here in 2015. Amazon also has another 5 projects in development. By the end of 2017, Amazon will have 260 MW of solar in Virginia, accounting for more than half the solar in the state.

The DEQ total only includes projects above 5 MW. It also omits another 94 MW of Dominion Energy projects permitted by the State Corporation Commission, all of which will be in operation by late fall. (Under legislation passed this year, Dominion’s projects will now also follow the DEQ Permit By Rule process, which applies to projects between 5 and 150 MW.)

In all, Virginia would have over 2,550 MW of utility-scale solar if all the projects were to be completed, at the maximum size for which they are seeking permits. But a closer look at the DEQ “notices of intent” suggests that so far the projects seem to have attracted only a limited number of customers: Amazon, our utilities, and the Commonwealth of Virginia itself.

Governor McAuliffe pledged that the Commonwealth would buy 110 MW of solar, enough to meet 8% of its electrical demand, split between onsite and offsite arrays. Announced deals include 18 MW at Naval Station Oceana and two projects totaling 32 MW that will serve the University of Virginia. The Commonwealth is also the off-taker of a project that provides Microsoft with RECs, to date the only announced deal involving a corporation other than Amazon.

Dominion Energy Virginia committed to 400 MW in 2015, and the utility’s 2017 integrated resource plan proposes a continuous build-out of 240 MW per year for the next 25 years. Old Dominion Electric Cooperative has also contracted for 30 MW of solar at two locations, with Dominion Energy owning the projects. Most recently, Central Virginia Electric Cooperative contracted for the output of two 5-MW solar farms. (These do not appear on the DEQ site.)

Where can we find more customers?

This leaves most proposed solar farms in Virginia without identified customers. Certainly, Dominion will prove to be the buyer for many, and there is no good reason it should stop at 240 MW per year. Appalachian Power is also considering sites in Virginia and West Virginia, but its appetite appears limited to 25 MW. The Commonwealth probably has a couple more deals in the works to complete McAuliffe’s pledge, and the next governor could up the ante—especially now we know that purchases by public colleges and universities count.

But for renewable energy to make a serious contribution to our energy supply, new customers have to commit. Fortunately they don’t need to sign onto Dominion’s half-baked green tariff proposal; they can contract directly with developers, as Amazon did initially. When Dominion Energy bought the first Amazon project from its from developer, the parties negotiated a special rate. Industry members say that deal is too complicated to serve as a model for others, but Dominion has indicated an interest in finding a solution.

Dominion’s participation was not necessary for Amazon to move forward, and it would not be required for other large customers to follow suit. In particular, a financial model known as a “virtual PPA” may offer an attractive option. In this arrangement, a large user contracts for the output of a solar or wind farm, but does not actually take delivery of the electricity. Instead, the power is sold into the wholesale market while the customer buys electricity from its utility as usual. The sale of electricity in the wholesale market offsets the cost of power purchased from the utility, acting as a hedge against rising energy prices. The customer gets the renewable energy certificates (RECs) to legally “green” its electricity supply.

A virtual PPA avoids treading on the monopoly power of a utility because it does not require a customer to take delivery of energy from the solar farm. According to Niels Crone of Customer First Renewables, a company that helps large businesses and institutions maximize the value of renewables, virtual PPAs could be a good option for customers located in Virginia.

Crone says that although virtual PPAs (as well as physical PPAs) deliver the greatest bottom-line benefit with larger projects, smaller customers can aggregate their demand to take advantage of economies of scale. That means the benefits don’t have to be limited to the Amazons of the world. Smaller corporations, universities, hospitals and even local government can band together to lower their energy costs—and make a positive impact on Virginia’s environment and economy.

8 thoughts on “Virginia could soon have more than 2,500 MW of solar. We just need customers.”