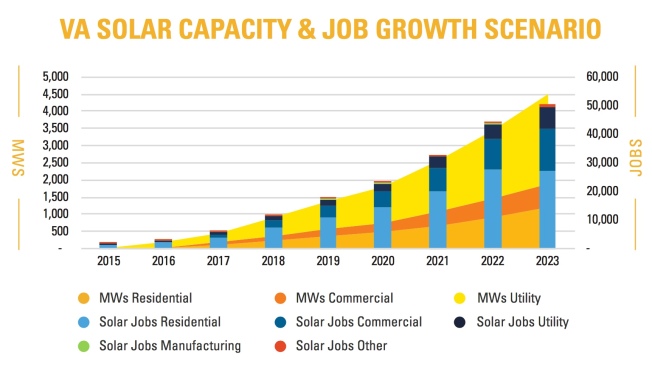 A new analysis from the non-profit Solar Foundation shows Virginia could create 50,400 jobs if it commits to building enough solar energy in the next five years to provide just 10% of our electricity supply.

The analysis takes the form of an “infographic” showing the implications of 10% solar. It would require building 15,000 megawatts of solar, divided among utility-scale solar farms, commercial installations, and the rooftops of houses. At the end of 2016, Virginia had a total of only 241 MW of solar installed, representing one-tenth of 1 percent of total electricity consumption. Getting to 10% by the end of 2023 would mean an annual growth rate of 61 percent. That would be impressive growth, but well below the 87 percent growth rate averaged by California and North Carolina over the past 6 years.

So 10% in five years should be doable. And indeed, viewed against the need to dramatically lower our carbon footprint, it seems like a very small step indeed. The McAuliffe administration wants to significantly cut statewide carbon emissions, and it is hard to see how we can do that without replacing the dirtiest fossil fuels with solar (and wind, and energy efficiency).

The good news is that the market is in our favor. Dominion Energy’s 2017 Integrated Resource Plan (IRP) identified utility-scale solar as the least-cost energy resource available in Virginia today. And participants in local cooperative buying programs for homeowners and businesses, known as “Solarize” programs, report payback times of under 10 years for rooftop solar, after which they will have nearly free electricity for 20 or 30 years.

Recent solar deals involving Amazon, Microsoft, and now Facebook show just how strong the demand is from customers. The very companies that our political leaders want so desperately to attract to Virginia are insisting on renewable electricity.

These deals demonstrate the direction of the market, and they will give an initial boost to solar employment, especially in the rural communities that are the best locations for solar farms. But restricting solar to a handful of new companies just coming into Virginia won’t get us to 15,000 MW and 10% solar. It’s also fundamentally unfair to the rest of us who are stuck with a dirty grid. Why should existing customers get left with polluting sources, while big tech companies get solar?

For us, Dominion’s IRP caps its solar plans at 240 MW per year, an amount it admits is arbitrary. In other words, Amazon got 260 MW, Facebook is getting 130 MW, but all the rest of Dominion’s customers put together will get just 240 MW per year.

As for customers who are determined to take matters into their own hands with rooftop solar, a host of unnecessary restrictions continue to limit growth. Virginia needs to put policies in place to push utilities to do more, to support local governments and schools that want solar, and to remove the barriers that limit private investment.

Solar companies around the state say if we can do that, they will do their part by hiring more Virginians. Here’s what some of them had to say about the 10% solar goal, and how to achieve it:

“We believe, as Virginians, that we can solve our energy challenges. Ours is a Virginia company founded and based in Charlottesville, and we are committed to building Virginia-based energy production facilities that benefit all Virginians. But the fact is that over the past few years our growth has come from business in other states. We have 26 employees in Virginia now, and we could increase that dramatically if Virginia promotes solar through policy changes that incentivize business owners to invest, allows competition, and supports the environmental message.” –Paul Risberg, President of Altenergy, Charlottesville

“The economics have never been better for solar in Virginia than they are right now. Prospect Solar has grown from two employees in 2010 to 16 full time employees today. Roles such as electricians, skilled labor, engineers, project managers, and sales people are integral to the success of each project. We hope Virginia will commit to a rapid, sustained buildout of all sectors of the solar industry, allowing us to continue adding local jobs.” –Andrew Skinner, Project Manager at Prospect Solar, Sterling

“Nationwide, the solar market was a 23 billion dollar industry in 2016. One out of every 50 new jobs in America was created by the solar industry last year. Sigora has been part of that. We have doubled in size in the past year and now employ 80 people in the Commonwealth.” –Karla Loeb, Vice President of Policy and Development for Sigora Solar, Charlottesville

“Local energy, local jobs, local investment. Our workforce is made up of local people—three of us went to Virginia Tech, one went to New River Community College, which has an Alternative Energy Program. An increase in demand of this scale would mean we’d hire more local people.” –Patrick Feucht, Manager of Baseline Solar, Blacksburg

“Residential and commercial rooftop solar has created most of the solar jobs in Virginia to date, and it has to be a part of the push to 10 percent. As we know, rooftop solar creates more jobs than utility solar, and these are good-paying, local jobs for local people. That’s one reason Virginia should lift the outdated 1 percent cap on net-metered solar, and leave the market open to anyone who wants to invest in their own home-grown energy supply.” –Sue Kanz, President of Solar Services, Virginia Beach

“Ten percent solar is a modest goal to shoot for given the strong economics of solar and the demand we are seeing from customers. Virginia has been held back by restrictive policies that have made it a ‘dark state.’ Reforming our policies would lead to a lot more economic development around solar.” –Tony Smith, President of Secure Futures LLC, Staunton