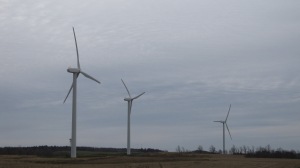 Not for you, Virginia.

Well, now it’s semi-official: in spite of what it has been telling customers for years, Dominion Power is not going to build onshore wind in Virginia. Speaking at an Edison Electric Institute conference in Dallas on November 13, Dominion Resources Executive Vice President and CFO Mark Gettrick spelled it out:

“When the wind business first got started, a decade, a decade and a half ago, we built two wind projects early on [Mt. Storm, in West Virginia, and Fowler Ridge, in Indiana], and we elected not to build any more. We steered away from wind. We do not think wind would ever be a good resource on land, in Virginia anyway, and so we elected not to pursue incremental wind projects.”

Someone should probably let the rest of the company in on the secret. Dominion’s website still insists the company has three Virginia onshore wind projects in development, and it included 247 megawatts’ worth in its latest Integrated Resource Plan (IRP). But the plan reflects the company’s cooling enthusiasm for wind energy, with the projects now slated for 2022-2024.

This is disappointing news, but it certainly isn’t a surprise. Dominion proposed its Virginia wind farms back before fracking caused natural gas prices to nosedive, undercutting the economic case for wind. At that point, Virginia’s lack of a real RPS meant Dominion had no incentive to build higher-priced generation, and every reason to believe the State Corporation Commission would reject a wind project, as it did similar proposals from Appalachian Power.

But though it is abandoning wind, the company is enthusiastic about solar. Gettrick said Dominion sees “gas and solar” as the way to comply with the EPA’s Clean Power Plan, which will require states to lower their carbon emissions from electric generating plants. Gettrick said:

“We see a growing need in Virginia to install solar for native load compliance with carbon. So that’s what we’re doing . . . So watch where we go with solar. We like the technology, the cost continues to drop, and we see it as a cornerstone for future development in Virginia.”

Advocates may wonder, why solar and not wind? Wind would seem to be cheaper, after all, and a single utility-scale turbine provides more power than hundreds of home solar systems.

The IRP offers part of the answer. For a utility, not all power is equal. Dominion has plenty of power for times when demand is low; the challenge is filling in the peaks and valleys of demand above that minimum level. Dominion needs the most power on summer days when solar produces well but wind does not.

The other part of the answer is price. This will surprise people who have seen the rock-bottom prices of wind power in places like Iowa and Texas, where wind outcompetes even natural gas. But it’s cheap to build wind among cornfields or on open rangeland, where access is easy. It’s more expensive to do it in the eastern mountains, where narrow, winding roads pose logistical challenges. The result is that wind power in the Southeast will cost about double what it costs in the Plains, according to the most recent Lazard analysis.

By contrast, Lazard calculates that utility scale solar power costs only about 20% more in the Southeast than it does in the dry, sunny Southwest, where utility-scale solar has reached grid parity. So while the best wind prices are well below the best solar prices nationwide, solar may be cheaper than wind in Virginia.

Lazard’s analyses are based on actual projects, but it also makes some predictions about where prices are headed. It projects unsubsidized utility-scale solar prices of six cents per kilowatt-hour by 2017, confirming predictions of widespread grid parity made by other analysts like Citibank and Deutsche Bank.

If you’re concerned about meeting EPA carbon emissions rules, or just concerned about the environment, period–or you want a reliable and stable-priced resource to hedge gas–solar makes very good sense.

Given these price trends, Dominion’s enthusiasm is entirely understandable. But surely it has some explaining to do, after years of trashing solar to legislators and the SCC. It has gone so far as to slap standby charges on customers who generate their own solar power. And as we’ve seen, its own forays into rooftop solar can’t be counted a success.

But perhaps we could all let bygones be bygones. If Dominion would focus its efforts on utility-scale solar while allowing the removal of barriers constraining the private market for commercial and residential solar, all of us would be winners.

5 thoughts on “Dominion ditches plans for onshore wind in Virginia, but grows bullish on solar”