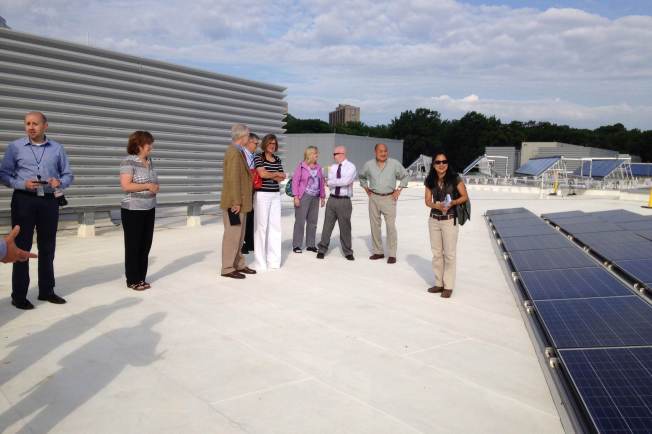 The map reveals that as of the end of 2017, Fairfax County had the most solar of any Virginia locality measured, reflecting its status as Virginia’s most populous county. Fairfax boasted a cumulative capacity of 2,104 kilowatts (kW) of solar, edging out Virginia’s richest county, Loudoun, which came in with 1,878 kW, as well as much smaller but more liberal Arlington with 1,785 kW.

All the Northern Virginia jurisdictions together (which also included Prince William, Manassas, Alexandria, and Falls Church) boasted a total of 8,443 kW, spread across 1,112 systems. That’s an average of about 7.5 kW per system, meaning these are overwhelmingly rooftop solar installations on homes and businesses. (An average home solar system is about 5 or 6 kW. Using solar for all of a home’s electricity needs might require 8-10 kW or more, especially if the home is heated with electricity or includes an electric vehicle.)

NoVa’s 8,443 kW is about as much as Prince George’s County, Maryland alone had five years ago. Today, PG County leads the region with 136,507 kW. Added together, the Maryland suburban localities finished the year with 272,688 kW of solar, over 32 times the suburban Virginia total. Washington, with 40,954 kW, beat all of suburban Virginia almost five times over.

So what do Maryland and DC have that Virginia doesn’t have? One answer is incentives. Maryland and DC have mandatory renewable portfolio standards (RPS) that require utilities to buy a certain percentage of their electricity from solar generated in state, including from their own customers. As the percentage requirement increases year after year, the forces of supply and demand set prices for solar renewable energy certificates (SRECs) that make solar a profitable investment for consumers. In DC, the value of SRECs is currently so high that a home solar installation can pay for itself in less than four years. In Virginia, with the federal 30% tax credit but no RPS or SREC market, payback may take ten years.

Ten years is still not a bad payoff for solar panels that can produce free electricity for 40 years or more. That points to the other advantage Maryland and DC have over Virginia: pro-solar policies. Virginia law does provide for net metering, the policy that lets a solar customer put surplus power onto the grid during the day and receive a credit for it that is used against the same amount of power drawn from the grid at night. Without net metering, we would have very little rooftop solar at all.

But a whole host of restrictions apply to net metering in Virginia. Homeowners are limited to a 20 kW system, and utilities can (and do) apply punitive fees known as “standby charges” to residential systems over 10 kW. Commercial customers are limited to 1,000 kW, no matter how much space they have or how much electricity they use. Sharing solar arrays among customers is prohibited. A building owner cannot install solar and sell the electricity to tenants. A local government cannot install solar on a vacant lot and use it to power a building across the street. Only certain customers can use third-party ownership financing.

And if the market flourishes anyway, Virginia law puts a ceiling on the total capacity of net-metered systems. Once the total reaches 1% of a utility’s sales, the program will come to a screeching halt. Think of it as an anti-RPS.

This year the Virginia General Assembly passed legislation that encourages Virginia utilities to develop solar, but the bill failed to address the barriers holding back private investments in solar. Other bills that would have opened up the market failed in the Republican-controlled (and utility-friendly) Commerce and Labor committees.

Barrier-busting bills will certainly be back again next year, and local governments that want more solar in their communities should make sure these reforms are part of their legislative wish list. Meanwhile, there is room under current law for local governments and schools to install a lot more solar than they have to date. Leading by example is a powerful tool to capture the attention of the public, educate residents on the benefits of solar, and instill pride in the community.

Maryland and DC may still beat Virginia on solar over the next few years, but it shouldn’t happen without a fight.