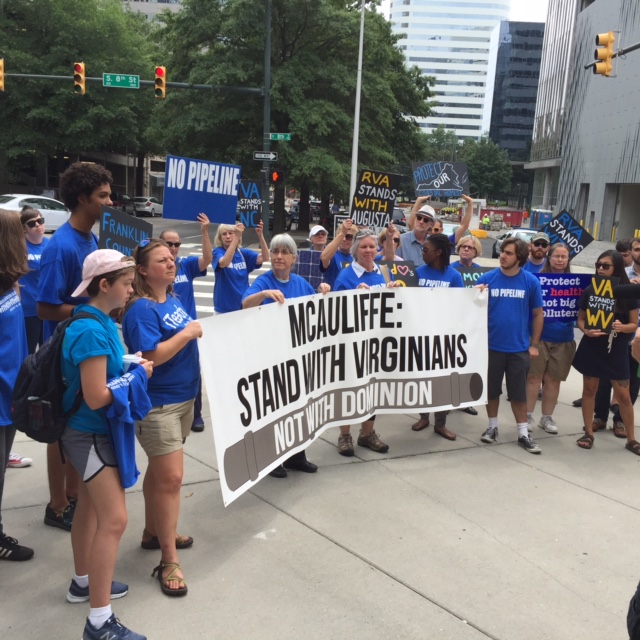 Meanwhile, though, other environmental leaders are praising the governor for speaking out about the reality of climate change and promising to forge ahead with implementation of the EPA’s Clean Power Plan in spite of the current judicial stay. They also say McAuliffe should get more credit for his vetoes of bills attacking the Clean Power Plan and extending subsidies to coal companies.

It is possible to agree with both the criticism and the defense. McAuliffe’s enthusiastic support for Dominion’s Atlantic Coast Pipeline has been an enduring irritant to climate activists as well as to landowners along the planned routes of the ACP and other natural gas pipelines. A Sierra Club analysis concluded that the pipelines would increase the Commonwealth’s greenhouse gas footprint by more than twice the total emissions of all power plant generation in the state.

He is also rightly criticized for supporting off-shore drilling, which would increase climate pollution and sea level rise and threaten the Navy’s and tourism’s contributions to Hampton Roads’ economy—a potential double whammy for residents and businesses.

And the Virginia DEQ has begun to look a lot like its North Carolina counterpart, a captured agency incapable of defending our air and water from the corporate polluters it is supposed to regulate. Sure, the problem has festered through several administrations, but McAuliffe’s failure to intervene is impossible to reconcile with his pro-environment rhetoric.

The problem goes beyond DEQ. In response to a detailed petition to the Governor for an interagency review to modernize the state’s fracking regulations, McAuliffe’s Secretary of Commerce and Labor announced a plan to limit the issues and refer them to an industry-dominated organization funded by the American Petroleum Institute for decision. This is hardly a sign of a Governor committed to protecting the environment, safety and health.

Yet messaging matters, and McAuliffe is a vocal messenger on the topic of climate change. The governor points to the flooding that routinely shuts down streets in Norfolk as proof that human-caused sea level rise is already a problem right here in Virginia. And as a team player for the Democrats, he supports Obama’s Clean Power Plan even as he brags (superfluously and probably incorrectly) that he persuaded EPA to soften its Virginia targets to reduce our burden of compliance.

Besides which, if he’s no Jerry Brown or Jay Inslee leading his state towards a fossil-free future, McAuliffe is also not Ken Cuccinelli, hounding climate scientists out of state. Given a Republican majority in Virginia’s General Assembly that is dedicated to propping up the coal industry and blocking anything EPA does, it could have been so much worse.

Regardless of how they feel about McAuliffe’s record, both the glass-half-full folks and the glass-half-empty folks agree there’s an “incomplete” on his report card that could make an enormous difference to his legacy. The ultimate test of the Governor’s climate credentials, they say, is whether he pushes DEQ to write a Clean Power Plan that puts a firm cap on total carbon emissions from the electric sector in Virginia. Though the General Assembly found a way to stop DEQ from completing work on the state implementation plan temporarily, nothing stops McAuliffe from taking a public stand on this most critical point.

That sounds like a no-brainer for a Democrat who is serious about reining in CO2. Unfortunately, it doesn’t meet with the approval of Tom Farrell, CEO of Dominion Resources, or Bob Blue, President of Dominion’s electric utility subsidiary, Dominion Virginia Power. They want DEQ to write a plan that leaves out new sources of emissions. That would let them continue building lots of big, new natural gas generating plants that, Blue assures us, will be capable of spewing carbon for at least another half century. All that burning of fracked gas would be lousy for the climate, but it would guarantee profits for Dominion’s utility and pipeline affiliate.

So on the one hand, the Governor can choose to be a climate hero, fighting sea level rise and deadly heat waves, creating tens of thousands of clean energy jobs and attracting forward-looking companies to the state, building his national reputation, doing what’s right for all our children and grandchildren, —

Or he can make Dominion happy.

It will be very interesting to see what becomes of that “incomplete” on his report card.